Former Amazon Manager Claims She Was Tasked With Looking Up Applicants’ Race, Ethnicity, And Gender 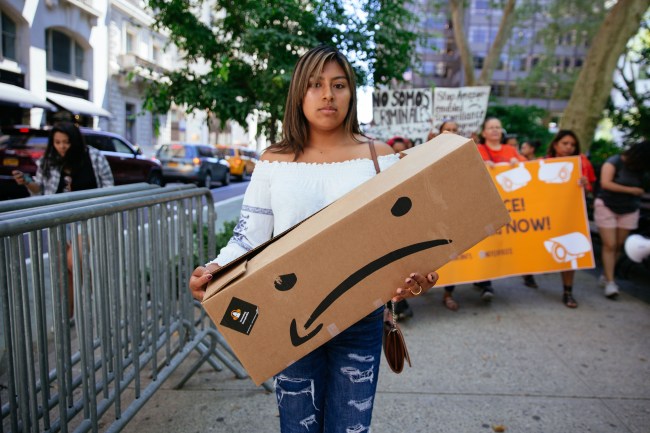 Update: an Amazon spokesperson has provided us with the following official statement:

“At our core, we fundamentally believe that diversity, inclusion, equality, and equal pay for equal work are not just good for our teams and our business, it’s just simply right. While we cannot comment on the specifics of this ongoing legal proceeding, Ms. McCarrick’s allegations are just not accurate.”

Lisa McCarrick, a 38-year-old California woman, is suing her former employer, Amazon, for allegedly having her look up the race, ethnicity, and gender of applicants on social media.

According to reports, McCarrick — who lives in Rocklin, California and previously worked as a regional manager for the online retail behemoth — is suing Amazon for retaliation, wrongful termination, failure to prevent discrimination and violation of the state’s labor code.

McCarrick claims that after she was promoted to regional manager five months into her employment, “her supervisor instructed McCarrick to go through the social media profiles of job candidates ‘for the purpose of ascertaining race/ethnicity and gender,’ according to the lawsuit.”

She says she was fired from her job after she raised concerns about the practice.

McCarrick knew that Amazon had been criticized in the past for a lack of diversity in the workplace and thought what she was being asked to do was unlawful, according to the lawsuit.

In September, she submitted a written complaint raising her concerns about being told to scour applicants’ social media accounts and also the pay disparity between herself and her male coworkers. Two months later, in November, she was called into a meeting with human resources and the director of loss prevention informing her that she was fired.

“During the meeting in which she was informed of her termination, it was communicated to her that her direct supervisor had admitted to utilizing social media accounts for the purpose of ascertaining race and ethnicity,” the suit states. “Plaintiff’s protected complaints of race/ethnicity discrimination were substantial motivating reasons for the decision to terminate her employment.” [via NBC News]

Additionally, McCarrick is also suing for violation of the state’s Equal Pay Act as she claims her male co-workers were paid significantly more than she was despite having similar roles.