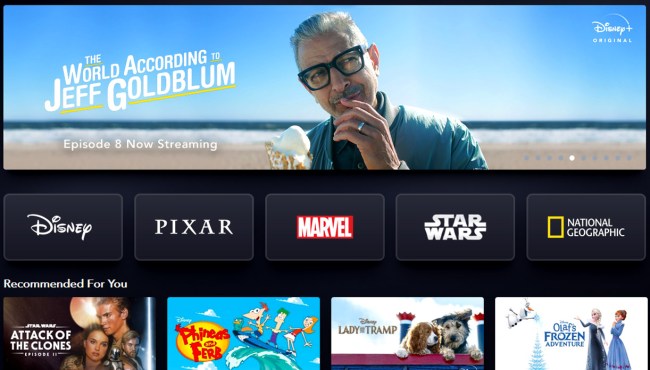 Just in case the 600+ titles that became available during the launch of Disney+ aren’t enough for you, the ultra-popular new streaming service from the House of Mouse has a whole new batch of movies, series and episodes that they will be adding in the coming weeks.

Among the added titles we’ll be able to enjoy on Disney+ are America’s National Parks, Continent 7: Antarctica as well as new episodes of Marvel’s Hero Project and The World According to Jeff Goldblum, and the premieres of Short Circuit and Diary of a Future President.

Haven’t jumped on the Disney+ train yet? We’ve got you covered with a Disney+/Hulu/ESPN+ bundle right here.

Jeff Goldblum takes a dip into the world of pools and follows his curiosity about its impact and ability to break boundaries. Jeff’s journey includes experiencing an LA water park, an aqua-therapy center and NASA’s neutral buoyancy lab, where he discovers firsthand the unique qualities of water and our relationship to it. He even tries his hand at synchronized swim routines in the process.

Jeff learns all that glitters is ‘gold’ when he takes a shimmering journey to unveil the extravagant joy of jewelry, including a visit to the jewelry masters who craft custom gold-and-diamond-encrusted Grillz for wealthy celebrity clients. He also discovers how sparkles play a large role at an Indian wedding; visits the HQ of a diamond foundry; and gets swept up in a New Orleans street parade.

Short Circuit is an experimental program where anyone at Walt Disney Animation Studios can pitch an idea and potentially be selected to create an original innovative short film with the support of the Studio and their fellow artists. The goal of the program is to take risks, surface new and diverse storytelling voices at the Studio and experiment with new technical innovation in the filmmaking process.