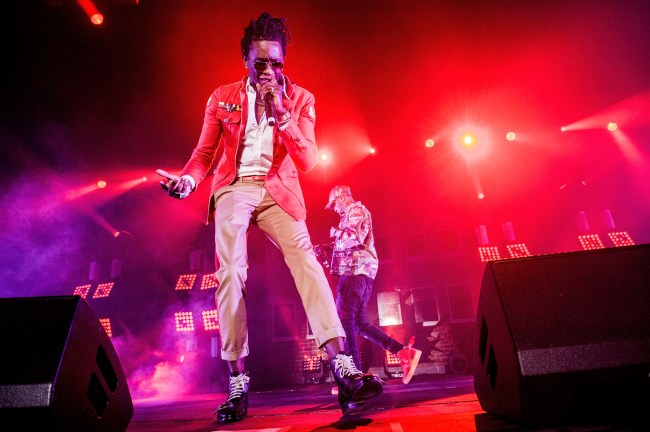 By all accounts, the new Young Thug did not sound like Old Thug, and the most attention-grabbing part of the album is how it was released. His label, 300 Entertainment, delivered live snakes to media offices to promo the album.

After running into an initial lack of praise for Slime Language it appears as if Young Thug had an Ace up his sleeve in the form of a collaboration with the one and only Sir Elton John. He recently performed at the private after party of the Royal Wedding between Prince Harry and Meghan Markle when he was scheduled to be in Las Vegas so you know the 71-year-old musician’s still got it.

According to NPR, it was reported a full two years ago (back in March 2016) that a collaboration was in the works between Sir Elton John and Young Thug so it’s unclear what took so long for this remix to see the light of day.

Here they are *allegedly* working in secret a few years ago:

At that time, The Fader said ‘a “Rocket Man” rework might become a reality at some point’ and that’s exactly what we’ve got on our hands today in this leaked remix of Elton John’s ‘Rocket Man’ from 1972.

Also, you can stream Young Thug’s full Slime Language album on Spotify using the link below if you want to check out

You digging the new Slime Language or does it lack the over-the-top nonsensical style of Young Thug’s music from a few years ago?