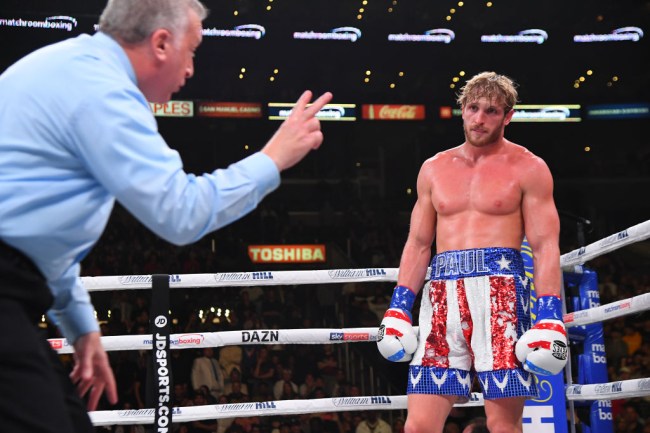 Paul Logan made his professional fighting debut last November, but he walked away as the loser after KSI won via split decision. Not to be dismayed, Logan Paul got in the ring with a fighter, much more talented and capable of knocking off his head with one hopping roundhouse kick.

Paulo Costa is an undefeated MMA fighter from Brazil who has a 13-0 record in the UFC. Costa is expected to challenge reigning UFC champion Israel Adesanya for the middleweight title.

Paulo Costa is a human wrecking ball, and why any amateur fighter would even contemplate getting in the ring with him is crazy.

Nevertheless, Paul Logan went to the UFC Performance Institute in Las Vegas and engaged in a sparring session with Costa. Big mistake.

“This morning we came here to the UFC Performance Institute,” Paul said in the video. “Apparently they want me to spar a guy by the name of Paulo Costa. He’s not a human, he’s a bear, he’s a 13 and 0 undefeated UFC fighter.”

“I don’t think he liked the way I looked at him at dinner last night or something, but it’s a good thing I’m a professional boxer now, who’s 0 and 1,” Logan joked. “God damn it.”

“They’re putting the headgear on me, and not him,” he said. “That’s how you know I’m fucked.” Narrator: He was indeed fucked.

Costa knocked out Logan Paul out cold with a nasty right hook. To his credit, Logan posted the skull-jarring video clip on his YouTube channel that has over 20 million subscribers.

“How’d I do?” Paul asks when he regains consciousness. “I did good?”

Costa gave Logan, who wrestled in high school, some nice words of encouragement after destroying him. “Ninety percent of guys who go to train MMA have good technique, but not hard spirit, not big heart, you know? You have both.”

Costa’s trainer told Logan, “You’re gonna do MMA for sure. You know how to fight.”

Getting millions to make YouTube videos seems a helluva better way to make a living than getting crushed in mixed martial arts.