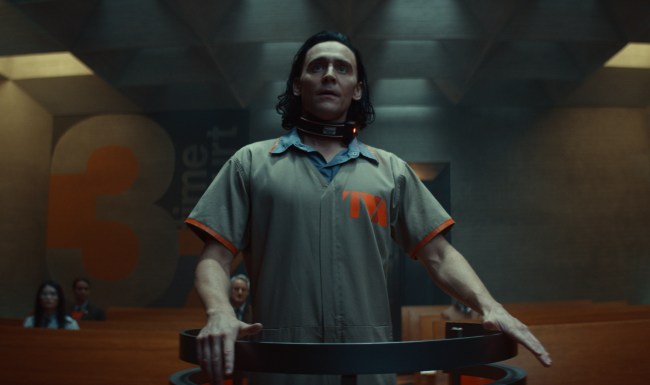 As is the case with any and all comic book projects that come out these days, the premiere episode of Loki was chock full of hints, nods, Easter Eggs, and blink-and-you’ll-miss-it references to the greater Marvel Cinematic Universe at large. That was to be expected, as this is a series about multiple versions of the same characters (variants) across multiple timelines, after all.

Among the many Easter Eggs in the first episode — including what seems like a couple of nods at the upcoming Doctor Strange sequel — fans believe they spotted none other than Peggy Carter being checked into the Time Variance Authority:

The last time we saw Peggy Carter, of course, was in the closing moments of Avengers: Endgame, where she’s seen tenderly dancing with Steve Rogers, who finally made his way back to here in what appears to be the 1950s (or somewhere around that time):

Rogers, who was tasked with returning the Infinity Stones used to defeat Thanos to their original location, was able to reunite with Peggy thanks to the time machine that the Avengers built. And, as we know about the Time Variance Authority, people hopping across the timeline is the very thing they’re there to monitor. Combine that with the MCU’s seeming unwillingness to declare Rogers as “dead” (every time he’s mentioned, it’s always “gone” or something like that, never “dead”), and you could perhaps make a compelling case that Peggy is being brought in to be questioned on the whereabouts of the former Captain America.

We recapped, reviewed, and broke down the premiere episode of Loki, titled “Glorious Purpose”, over on the Post-Credit Podcast, so make sure to check that out. We’ll be covering every new episode of Loki as soon as it drops.