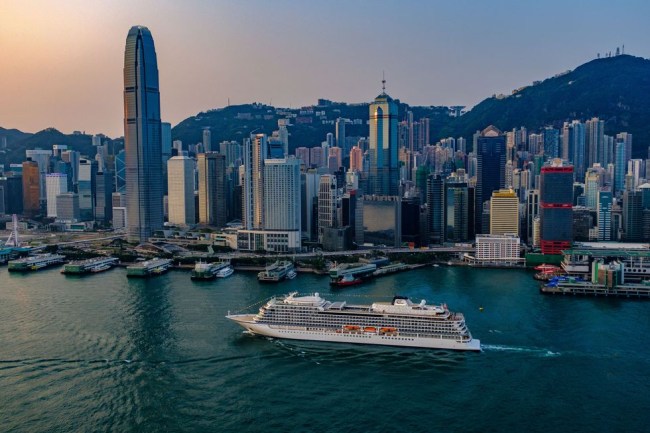 If you go on one cruise this year make it this one. Viking Cruises is offering a once-in-a-lifetime trip that will take you to 113 ports in 59 countries over 245 days. This stupendous vacation is the longest cruise ever. You’ll board the Viking Sun, which accommodates up to 930 guests in 465 staterooms. Let your boss known now that you’re going to need eight months off.

Visit six continents in Viking’s Ultimate World Cruise that lasts eight months. You’ll start your epic vacation in August of 2019 in London before traveling to Norway then to Iceland and Greenland. You’ll make your way to Canada, then sail to Boston and New York City before hitting up the Caribbean. Next up is South America with stops in Rio de Janeiro, Brazil and Lima, Peru. Then you’re off to the South Pacific by visiting New Zealand and Australia. Followed by a jaunt to Southeast Asia, India, and Northern Africa. Your last ports are in Spain and Portugal before returning to London in 2020.

In the times you’re not visiting various ports, you can dine on the Viking Sun’s eight restaurants including The Restaurant, the World Cafe, The Kitchen Table, Chef’s Table and Italian at Manfredi’s. There are also burgers at the Pool Grill, afternoon tea at the Wintergarden, deli food at Mamsen’s, and 24-hour room service delivered to your cabin.

The longest-ever continuous world cruise itinerary doesn’t come cheap, however. For the 245-day cruise, fares start at $92,990 per person, which breaks down to about $380 a day. But if you book before the end of 2018 you’ll also receive $4,000 in shore excursion credits and $2,000 in shipboard credits. If you don’t have nearly $100K to blow on a 245-day vaca don’t sweat it because Viking is also offering a shorter itinerary called World Treasures. This “shorter” cruise of 127 days visits 61 ports in 33 countries and goes from London to Los Angeles for only $47,995. So start taking money out of your trust fund and notify your boss that you’re going to need eight months off to find yourself.

If you don’t have the money and free time, why not try to get this summer job that will pay you to travel the world or this opportunity that will pay you $10,000 to take photos of sunsets around the United States.