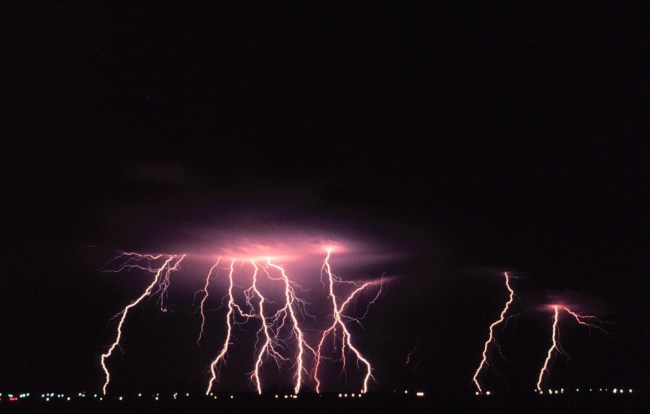 The record for the longest lightning strike ever recorded stands an astounding 440.6 miles. To put that in context, the entire state of Florida is 447-miles long. This is also roughly the distance between Boston and Washington D.C. and I’m legitimately having trouble wrapping my mind around a lightning bolt extending 30 miles let alone 450.

This strike was recorded in Southern Brazil a while back (October 31, 2018) but has just been certified by the World Meteorological Organization this week along with a record 16.73-second lightning strike which took place over Argentina on March 4th, 2019.

🌩️WMO has recognized 2 new world records for the longest reported distance and duration for a single lightning flash in, respectively, Brazil and Argentina.
DOUBLE the previous records

709km= distance from Boston to Washington or London to Swiss borderhttps://t.co/xWWp2l0SzQ pic.twitter.com/8vSfTZCFcn

The WMO sent this news out in a press release on Thursday:

The world’s greatest extent for a single lightning flash is a single flash that covered a horizontal distance of 709 ± 8 km (440.6 ± 5 mi) across parts of southern Brazil on 31 October 2018. This is equivalent to the distance between Boston and Washington DC in the United States of America or between London and the border of Switzerland near Basel.
The greatest duration for a single lightning flash is 16.73 seconds from a flash that developed continuously over northern Argentina on 4 March 2019.

The previous record for the longest detected distance for a single lightning flash was for 321 km (199.5 miles) on 20 June 2007 across the U.S. state of Oklahoma. Both the previous and new record used the same maximum great circle distance methodology to measure flash extent.

The previous record for duration was for a single lightning flash that lasted continuously for 7.74 seconds on 30 August 2012 over Provence-Alpes-Côte d’Azur, France.

A 440-mile lightning strike is absolutely terrifying. As is a strike lasting almost 17 seconds. Lightning is a beautiful phenomenon if you’re able to witness it from indoors but just this week almost 120 people in India were killed during a lightning storm.

According to the press release, previous records for lightning strikes were tracked using land-based technology but they are now using space-based technology. This includes Geostationary Lightning Mappers (GLMs) on the R-series Geostationary Operational Environmental Satellites (GOES-16 and 17) and it allows these scientists to better track lightning activity across the globe, particularly in the area of ‘mega flashes’.

“This dramatic augmentation of our space-based remote sensing capabilities has allowed the detection of previously unobserved extremes in lightning occurrence, known as ‘megaflashes,’ which are defined as horizontal mesoscale lightning discharges that reach 100s of kilometers in length,” said lead author and evaluation committee member Michael J. Peterson, of the Space and Remote Sensing Group (ISR-2) of Los Alamos National Laboratory, USA.

The space-based instruments will provide near-global coverage of total lightning (both intracloud flashes and cloud-to-ground flashes). This includes the Americas hotspots for Mesoscale Convective System (MCS) thunderstorms whose dynamics permit extraordinary megaflashes to occur – namely, the Great Plains in North America, and the La Plata basin in South America.

440 miles of lightning in one strike. That’s truly astounding. That’s longer that most people are comfortable road-tripping. At its widest part, the United Kingdom is only 300-miles wide (600 miles long). So it would’ve stretched well across the UK and over two-thirds from top to bottom. Let that sink in.