Watching The Lox Vs. Dipset In Person Proved The ‘TrillerVerz’ Could Be The Future Of Live Entertainment—But There’s Still Some Work To Do 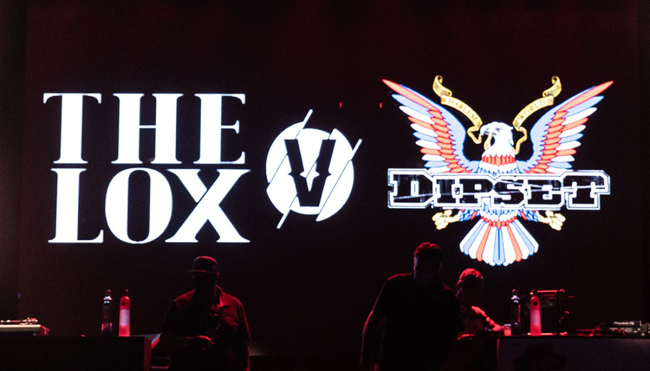 It’s barely 7 P.M. on a Tuesday night, and the Hulu Theater—a cavernous hall tucked away underneath Madison Square Garden—has developed a noticeable haze and an unmistakable odor that makes it very evident plenty of the people who’ve begun to trickle into the more than 5,500 seats it boasts are taking full advantage of the fact that marijuana has been legalized in the state of New York.

The majority of the spectators making their way into the venue are there to watch two legendary New York City hip-hop crews go toe-to-toe courtesy of Verzuz, the battle series created by equally hallowed producers Timbaland and Swizz Beats that became an overnight sensation after making its grand debut in the early stages of the pandemic.

Verzuz initially carved out a niche for itself by giving rap fans a chance to watch some of the biggest names in the history of the game compare their catalogs in a quest for bragging rights from the comfort of their couch. Earlier this year, the brand was acquired by Triller—the startup that’s managed to carve out a niche of its own on the back of its boxing events—and on Tuesday night, I was lucky enough to get a firsthand glimpse at the company’s master plan when I entered the “TrillerVerz” for a night of fights capped off by the infinitely hyped battle between The Lox and Dipset.

Based on what went down over the course of the evening, I can safely say the TrillerVerz has an incredible amount of potential to be The Next Big Thing in live entertainment—assuming it manages to address some small problems that put a slight damper on its big debut. 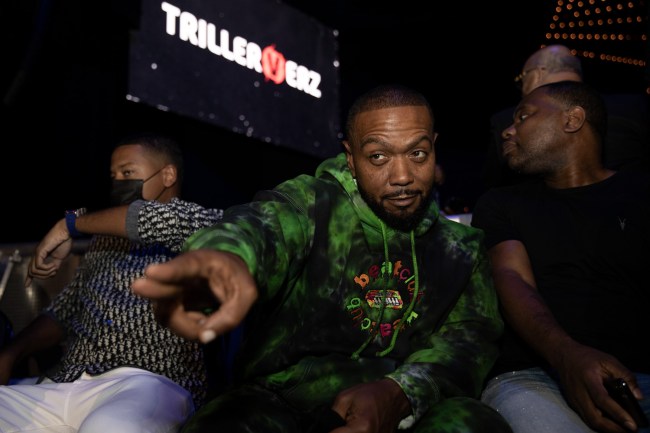 If the name somehow didn’t tip you off, the TrillerVerz is a hybrid of the events the brands it derives its name from have relied on to become the formidable force they’ve evolved into in a remarkably short span of time.

Anyone who purchased a ticket had the chance to arrive at 4 P.M. to take in the ten bouts that comprised the Triller Fight Club card (headlined by a heavyweight matchup between Michael Hunter and Mike Wilson), after which the ring was transformed into the stage where members of The Lox and The Diplomats did their thing.

There were plenty of boxing fans who entered the building early in the evening to get their fix, but it’s safe to say the Verzuz portion of the night was the primary draw based on how many seats were still empty when Michael Buffer uttered his iconic “Let’s get ready to ruuuuumble!” prior to the main event. It seemed like some attendees were almost confused by the mere presence of the bouts, but Hunter managed to win many of them over with a dominant performance that ended when he dropped Wilson to the canvas in the fourth round of the fight.

Lights out.
This is just the beginning. Welcome to the #TrillerVerz. Go to https://t.co/3fia6Fid87 to get in on the action! pic.twitter.com/Idutn1d24V 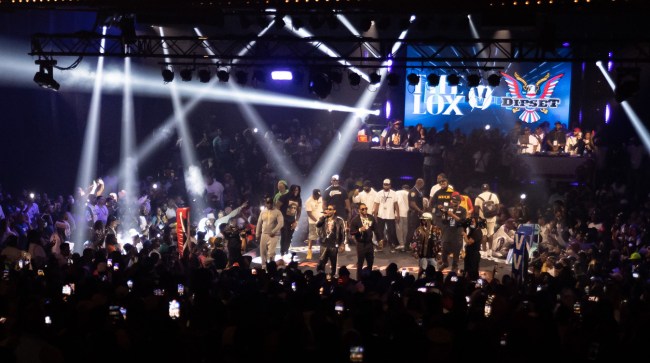 Part of me feels like there’s no real use in trying to summarize why The Lox and Dipset facing off in a Verzuz battle at Madison Square Garden had the potential to become an instantly iconic night; you have to assume virtually everyone who made the trek to the theater or blocked out a chunk of their Tuesday to tune in is well-versed in why it was such a huge event, and the significance of the showdown would probably be lost on most people who need it explained to them.

With that said, here’s a quick primer for those of you who might not be in the know. 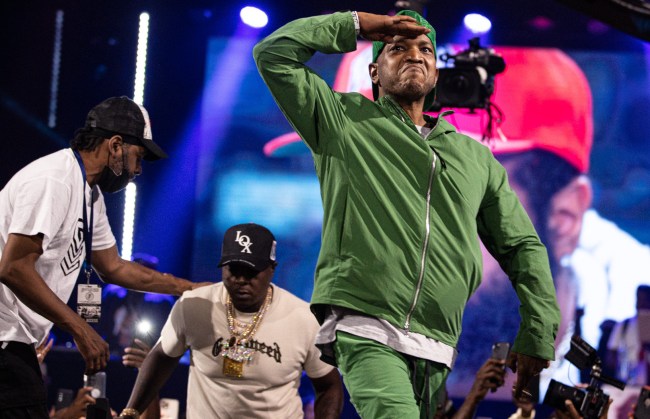 First off, we have The Lox. Consisting of Yonkers natives Jadakiss, Sheek Louch, and Styles P, the group got its start when it signed with Bad Boy Entertainment in the mid-1990s before joining forces with DMX and Ruff Ryder Records. The prolific trio is responsible for a bevy of posse cuts as well as the many solo projects and featured verses they’ve dropped over the years, and represent a bridge in the gap between the era defined by the deadly beef between rappers on opposite coasts and the period where Dipset rose to prominence. 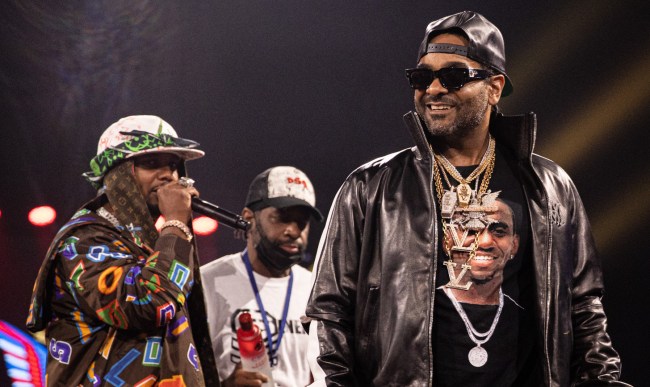 Officially referred to as “The Diplomats,” Cam’ron, Jim Jones, Juelz Santana, and Freekey Zekey proudly represent Harlem. Around the turn of the millennium, the crew (with Cam’ron at the forefront) burst onto the scene with music that provided an unfiltered look at the neighborhood they hailed from and the lifestyle that defines it. After engaging in a high-profile feud with Jay-Z and Roc-A-Fella Records in the mid-2000s, the group disbanded (with Jones and Santana scoring some radio hits after pursuing a solo career), but they’ve consistently worked together since linking back up a decade ago.

When the Verzuz battle was initially floated, Jones explained why he thought the two groups were a natural fit, saying they had, “a lot of camaraderie, a lot of good energy, and a lot of energy to bounce off each other.” The same could be said about the energy in the venue when they were slated to take the stage, as I’ve never attended a single show that’s come close to matching the palpably electric atmosphere inside Hulu Theater on Tuesday night.

While the Verzuz battle kicked off almost an hour after its scheduled start time, the wait was undoubtedly worth it, and both groups easily made up for lost time over the course of the two hours they patrolled the stage (although Cam’ron did spend a sizeable chunk of the evening reclining on a beach chair that materialized on it). 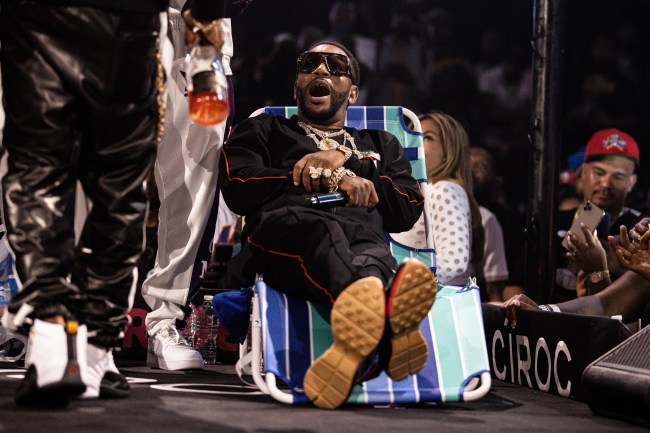 I have to admit I gave Dipset the edge coming into things, and while I was going to keep a scorecard to try to keep track of who won each round, it didn’t take long for me to abandon that plan after it became incredibly evident The Lox had come to win while Dipset had, well, just sort of come.

Styles P was not shy about calling out The Diplomats for half-assing the battle by occasionally rapping over their prerecorded vocals, and Dipset’s lack of chemistry was only further highlighted by the incredible energy all three members of The Lox brought to the table.

While The Lox easily came away with the W, there weren’t really any losers when everything was said and done.

While it’s safe to assume this is just a first in a long line of similar events Triller and Verzuz have in store, I would note there are a few aspects that need to be ironed out if you’re thinking about grabbing a ticket to one.

The TrillerVerz Still Has Some Room To Expand

There’s no doubt that anyone who was equally invested in watching boxers exchange punches and seeing The Lox and Dipset exchange verbal jabs easily got their money’s worth. It makes sense that Triller would combine both branches of the business as it did in pursuit of a diverse viewing audience, but there didn’t seem to be a huge amount of cross-appeal in the crowd based on the general indifference the bouts generated compared to the unbridled insanity of the Verzuz battle.

Certain aspects of the execution also left a bit to be desired. Hosting the event on a Tuesday night was already a curious decision, and the fact that The Lox and Dipset didn’t even take the stage until around 10:30 would make future events a fairly hard sell for anyone who has to wake up at a reasonable hour the next morning. There was only so much the DJ tasked with hyping up the audience could do to keep them interested in the interim, but I could’ve gone without the repeated reminders that he was just there to “take the temperature” of the increasingly lukewarm crowd (it seems the delay stemmed from some fairly obvious logistical issues primarily related to crowd control—or, more accurately, lack thereof—as there was no dedicated pathway to get to the stage or seemingly anyone in charge of deciding who was allowed onto it in the first place).

The chaotic and unpredictable nature of Verzuz battles is a major part of their appeal, but I also found myself wishing there was a dedicated moderator to cut down on the frequently unintelligible back-and-forth between the two groups; at times, it felt less like a major event being streamed to hundreds of thousands of people and more like a playground battle between middle schoolers with access to ample amount to Moet and Ciroc. At some point, you need an administrator to step in.

However, this inaugural event made it evident the TrillerVerz has some major potential, and I’m very intrigued to see where it goes from here.

If you missed Tuesday’s show, you can catch it in its entirety over on FITE.