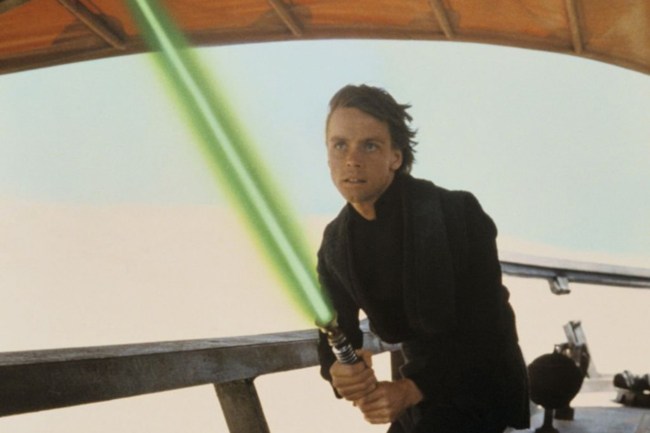 Given the astounding quality and success of The Mandalorian, the forthcoming Obi-Wan Kenobi series is now one of the most eagerly-anticipated television shows of the next couple of years, especially when considering that series director Deborah Chow helmed *the two best* episodes of The Mandalorian, Chapter 3: “The Sin” and Chapter 8: “Redemption”.

With Disney now incredibly serious about making Disney+ a destination for premiere content, the Kenobi show — similar to The Mandalorian — is sure to have a wider impact on the entire Star Wars universe.

That will be especially true if this latest casting rumor is to be believed, as it has been reported that Disney is currently looking to cast a young LUKE FUCKING SKYWALKER for the series.

When the Obi-Wan Kenobi series hits Disney+ — whenever that may be — it will reportedly feature another familiar face in addition to Ewan McGregor’s titular character.

According to fan scooper @DanielRPK, the series is currently casting for a young Luke Skywalker, cementing the show’s timeline sometime immediately before the events of Star Wars: A New Hope. The ace scooper shared the news on his Patreon page, revealing a new casting grid being distributed sent to agents has unveiled the news. [via ComicBook]

At this time, while no official release date has been announced for the show (hell, it doesn’t even have an official title yet), my guess is that it will be released sometime in 2021.

With the last two major Star Wars films — Solo in 2018 and The Rise of Skywalker in 2019 — being relative disappointments, it wouldn’t be a surprise to anyone if Disney and Lucasfilm made their various TV series their primary focus in the coming years.

As for when exactly said Kenobi series will take place in the Star Wars timeline, the series — which will reportedly consist of six hour-long episodes — takes place eight years after Star Wars: Revenge of the Sith, or, alternatively, eleven years before Star Wars: A New Hope.

“The storyline sits between Episode III and Episode IV. The Jedi Order was falling apart. It will be interesting to take a character we know in a way and show him—Well, his arc will be quite interesting, I think, dealing with that the fact that all the Jedi were slaughtered with the end of Episode III. It’s quite something to get over,” McGregor previously revealed to Men’s Journal.

Therefore, young Luke Skywalker will approximately eight-years-old when the series begins, which is about the same age as Anakin Skywalker (aka Darth Vader) is when we meet him in The Phantom Menace. An obvious and intentional parallel, I’m sure.