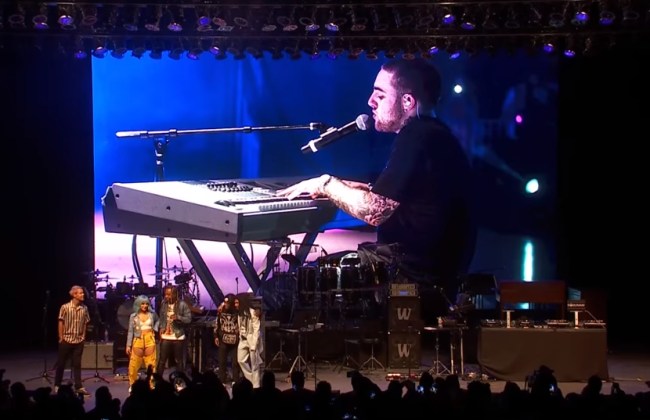 Some of the biggest music acts and celebrities in the world brought their best as they honored the life of Mac Miller in a tribute concert. The “Mac Miller: A Celebration of Life” concert was a stirring show of epic proportions that honored Malcolm James McCormick and ended with a never-before-heard song by the beloved Aquarium rapper.

The “Celebration of Life” show featured an all-star lineup that included Travis Scott, SZA, John Mayer, Chance the Rapper, Anderson .Paak, Miguel, Vince Staples, and Schoolboy Q. During the three-hour memorial there was an emotional video montage tribute from celebrities such as Donald Glover, Lil Wayne, A$AP Ferg, Pharrell, Joey Bada$$, Tyler The Creator, DJ Jazzy Jeff, Jason Sudeikis, Rick Ross, Aminé, DJ Premier, Dev Hynes, Dillon Francis, The Internet, Pusha T, G-Eazy, and Casey Veggies. The incredible show went down at Greek Theatre in Los Angeles, which is where Miller was scheduled to play on Halloween. His fellow musicians did not let him down.

So many from the hip-hop community left special messages for Mac from @RickRoss to @Pharrell. 🙏🏽#RIPMacMiller

Vince Staples and Thundercat wowed the crowd with their stirring performance.

Travis Scott closed out the show with a heartbreaking message. “To all Mac’s fans just know that you kept this whole thing going…we all know Mac is watching over us…I just want everybody to stay strong,” Scott said. “If you have a friend with you, just always tell ’em you love them. Always give your mama a kiss. Always give your dad a hug. No matter if you’re mad at somebody, the next day check on ’em, it don’t matter. Everybody is somebody. We’re all one, no matter their skin color, their hair, if you’re a rapper, a basketball player. The key word to this whole motherfucking shit is love.”

Before @trvisXX closed out the Mac Miller tribute show, he had a special message for everyonepic.twitter.com/utRPs6wy2l

Mac Miller was the final act in the concert where he played a previously unreleased piano ballad.

The “Mac Miller: A Celebration of Life” concert benefitted the Mac Miller Circles Fund, a nonprofit organization that supports youth arts and community-building programs. Mac Miller died on September 7th from an apparent drug overdose, he was only 26-years-old.

Ariana Grande did not attend the tribute concert, but she honored Malcolm in a touching way. The pop singer and ex-girlfriend of Miller posted a photo of herself wearing Malcolm’s sweater while cuddling his dog.

A little over a week ago, Ariana shared a tender video of Miller getting ready for Madonna’s Oscars party and Grande’s grandmother helping him with his tuxedo jacket.

You can watch the entire “Mac Miller: A Celebration of Life” concert below. RIP Mac Miller.