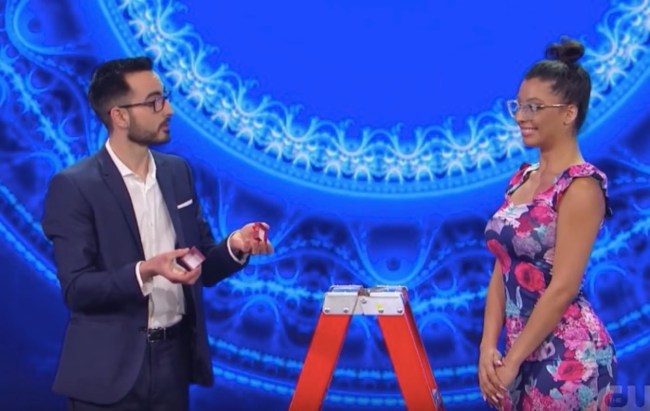 Penn and Teller are two of the most famous magicians on the planet. They’ve worked in the industry for decades and have come across pretty much every magic trick imaginable, and they’ve spent tens of years perfecting new tricks.

They have a TV show on the CB called Penn and Teller Fool Us where aspiring magicians come on and perform a trick for them and a live audience. The idea is if they ‘fool’ Penn and Teller then they’ll win a prize. P&T have seen pretty much every trick on the planet and even the ones they haven’t seen they have a pretty good idea of it works, so it’s darn near impossible to fool them.

Spanish magician Adrián Carratalá appeared on the show and performed a ‘ring trick’. This is one of the oldest and most popular types of tricks in magic. I’m almost certain that you’ve seen it in some form before, I saw David Blaine perform it last year in Florida.

The basic gist is that a person is wearing a ring and the magician makes that ring disappear and reappear somewhere else. Penn and Teller thought they’d had this guy all figured out but not only did he fool them he also anticipated how he’d fool them and he worked that into his act so he blew their minds twice as P&T were sitting in their judge’s chairs.

I kind of love how much confidence he had going into this trick that he was able to tweak his entire outfit to fit the gag. And then he was willing to rip off all his clothes on stage in front a few hundred strangers.

It’s truly a shame that this wouldn’t work in a normal magic show because the audience wouldn’t ever call him out for how he performed a Ring Trick. The reveal here was spectacular.

This Fool Us clip was shared on Adrián Carratalá’s YouTube channel where he’s shared other videos of his magic throughout the years. Unfortunately, unless you speak Spanish you’ll need to turn on the subtitles.

But that brings me to another point, this trick was THAT MUCH better because he was performing it in his non-native language. Clearly, he’s a fluent English speaker but it’s not his first language and that makes this even more impressive.