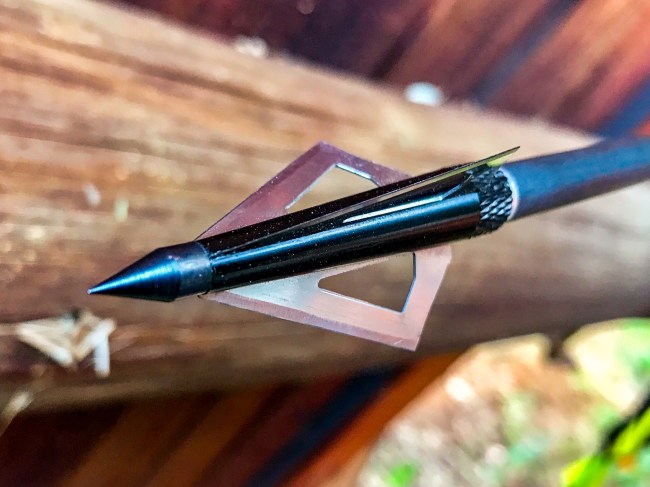 A magician who performs under the name of ‘One Crazy China’ made headlines over the weekend after he GOT SHOT IN THE HEAD with an arrow fired from a crossbow during a performance going horribly wrong.

According to reports, the illusion was designed so that if and when it went wrong it wouldn’t kill him, but the audience was cleared out of the venue and he was rushed to the hospital for treatment. I say illusion here because all Arrested Development fans know that ‘tricks’ are something a sex worker does for money, according to Gob Bluth.

The magician performs with a magic partner and it seems like the partner is reeeaaaallllyyy trying to downplay reports of the severity of the injury, according to Newsweek.

Magician Li Lau took the crossbow to the head during a performance at the 2019 National Arts Festival in Makhanda, South Africa and a local report makes it sound pretty gnarly:

The crowd was asked to leave the hall after a single arrow appeared to strike Lau during an illusion, according to the Daily Dispatch, an Eastern Cape newspaper. Festival organisers said Lau had been taken to Settlers Hospital in Makhanda, formerly Grahamstown, and received stitches to the back of his head.

The art organization’s chief executive, Tony Lankester, told the paper that trauma counseling would be made available to members of the audience who witnessed the accident.

“We are informed that the crossbow did not penetrate his skull, and Mr. Lau is fully conscious,” Lankester said Sunday, according to the Daily Dispatch. “The festival deeply regrets the incident and is in conversation with the performers to establish what went wrong with the illusion.” (via)

These are the two magicians that were on stage:

As I mentioned, the performing partner tried to downplay reports of the injury which is interesting to me. If I’m a semi-famous but not mainstream magician and I’m suddenly thrust into the world news because of a freak injury then I’m probably 100% trying to sell this as a nearly-fatal injury so that the venue promoters can use that to fill seats in the audience.

People will want to see the magic duo when one of them almost died from a crossbow arrow to the head, they won’t want to see the two magicians who designed a trick so that nobody could ever get seriously hurt when that’s exactly what they’re telling the audience could happen:

But co-star Brendon Peel told Newsweek the story had been blown out of proportion by the local media outlets and hit back against the newspaper’s claims he was responsible for an error.

“There was a crossbow involved but we structured the illusion so that it is impossible to be truly fatal,” he said. “Also, it was not me who created the effect, it is Li Lau who devised it, I merely assist in the illusion. The media has painted it out as if I physically shot the thing at him. I won’t go in detail how Li’s escape works, which he designed, but at the end of the day it is a trick.” He said viewers “loved the show.”

“There was a slight mishap and we took all necessary precautions just to be overly cautious. All is well on both our sides and the shows are continuing as scheduled. The entire story was blown way out of proportion and Li and myself were not reached out to make a comment,” Peel continued. (via)

As for the trauma counseling offered to audience members, I’m curious if anyone takes them up on that offer. If you’ve ever seen a performer injure themselves in front of a live audience then you probably know how scarring that can be for everyone involved. I went on a vacation to Disney with a friend’s family back in high school and one of the nights we had dinner at ‘China’ in Epcot.

Before dinner, there was an acrobatics show where the performers lifted three poles into the air which were similar to goal posts with two sidebars and one crossbar. They were doing flips back and forth and it was all entertaining until one of the kids (I think the crew was a large family) attempted to do a backflip from one bar to the next and missed.

He was about 8 feet in the air and flew to the ground, landing on his head, where he immediately started spasming out of control and within seconds a Disney safety/rescue crew came out of nowhere with a stretcher, covered him, and whisked him away. The family/crew WENT BACK to performing as if nothing had happened while the audience stood there incredulous at what we’d just seen happen and disappear in an instant.

Somehow I made this story of a magician getting shot in the head with a crossbow about me seeing a kid break his neck (and possibly die?) at Disney World’s Epcot years ago and that wasn’t my intention, I guess I just needed to get that off my chest.

This is the magician who was shot in the head by a crossbow:

For more on this magician’s story, you can click here to visit Newsweek.