Grab Some Nuts To Help With Your Fertility Issues 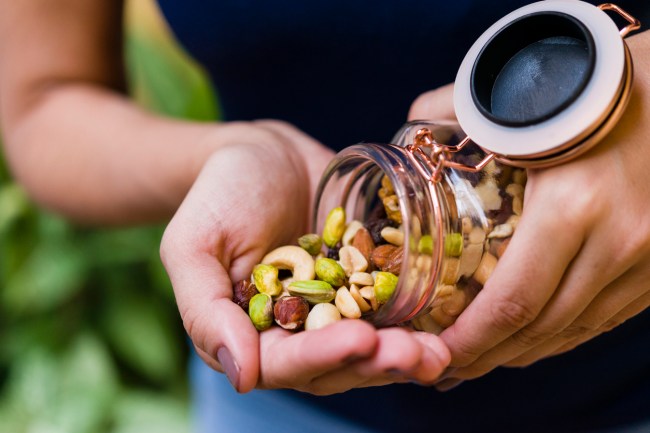 Are your lil swimmers not swimming, or do you have too few swimmers? Have you tried grabbing some nuts? Do not go up to some dude and clutch their nads. We’re talking about delicious nuts such as Brazil nuts, hazelnuts, and walnuts.

A new study found that a diet rich in tree nuts helps male fertility. Researchers from the Human Nutrition Unit of the Universitat Rovira i Virgili, the Pere Virgili Institute of Health and CIBERobn, and researchers from the University of Utah found that the addition of tree nuts to a man’s diet for 14 weeks significantly improved the sperm count, viability, motility, and morphology.

Sperm count means the concentration of sperm, and if you have lower than normal count if you have fewer than 15 million sperm per milliliter of semen. Sperm viability refers to the percentage of live sperm in the semen sample, and you want to have at least 58% of the sperm cells to be living. Motility is the percentage of sperm who can move and will actually put in the work to find the egg. You want to have at least 40% of swimmers actively swimming. Sperm morphology means the shape of the sperm cells.

The study found that consumption of a mixture of tree nuts (almonds, Brazil nuts, cashews, hazelnuts, pecans, pistachios, and walnuts) with a Western-style diet dramatically boosted sperm count, viability, motility, and morphology. The study on 72 young, healthy, non-smoking men found that the nuts affected sperm DNA methylation in specific regions. “DNA methylation is a biological process by which methyl groups are added to the DNA molecule,” according to Wikipedia.

“This work demonstrates that there are some sensitive regions of the sperm epigenome that respond to diet, and which can result in changes in sperm and in its ability to fertilize,” said the study’s author Albert Salas-Huetos from Harvard University.

The findings of the study were recently published in the scientific journal Andrology.

Previous scientific studies have found that chemicals in non-stick frying pans could negatively affect sperm counts and quality. Another study found that marijuana could mellow out your lil swimmers and make them lazy.