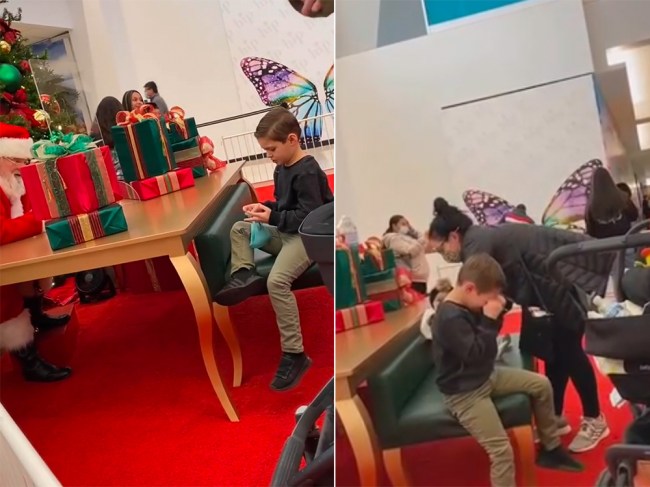 In my eyes, mall Santas have two jobs – be nice to kids and agree to whatever they ask for on Christmas morning. The hard part of the job – getting the actual gifts – then falls on the parents to deliver on the requests.

This mall Santa failed at both tasks, and to make matters worse, the opinionated jerkoff made a young kid cry. The kid merely held up his end of the deal in this silly and outdated holiday tradition – he asked Santa for a Nerf gun for Christmas.

“Nope, not even a Nerf gun,” said the probably unemployed grifter the other 11 months out of the year.

Santa tried to ease the tension, rattling off random toys the kid likely has zero interest in opening on Christmas morning.

“If your dad wants to get it for you, that’s fine, but I can’t bring it to you,” the Santa Claus said. “What else would you like? Lots of other toys. Legos. There’s bicycles. There’s cars and trucks. What do you think?”

Hey, hillybilly, what if the kid goes “ok, a bike,” and his parents can’t afford a bike for Christmas or can’t find a two-wheeler because they’ve been sold out since pre-Covid?

After getting shut down on his Nerf gun request, the kid turns to his mom and bursts into tears. The mom comforts the kid, reassuring her son he’ll “still get it.’’

My kids are 10 and 7. Neither stood in line to see Santa at a mall or sat on some strange old guy’s lap in the middle of the food court.

Going to see Santa at the mall is dumb. Not as dumb as the Easter bunny tradition, but pretty close.

The only thing dumber is the thought process that giving a young child a Nerf gun will lead to a life of violence, or whatever stupid idea to which this $8-an-hour Saint Nick subscribes.

As a kid, I owned several fake pistols, rifles, and weapons. Guess how many I own now? None. There’s zero connection between owning a foam bullet shooting toy as a child and becoming a mass murderer.

But do you know what will damage a kid for a while? An unemployed Kris Kringle cosplayer behind a glass shield telling a kid he’s not getting what he wants for Xmas.

Ask your kids what they want for Christmas. Make them write a letter to Santa. Address the letter to the North Pole and let them stick it in an official USPS mailbox. Save the trip to the mall.