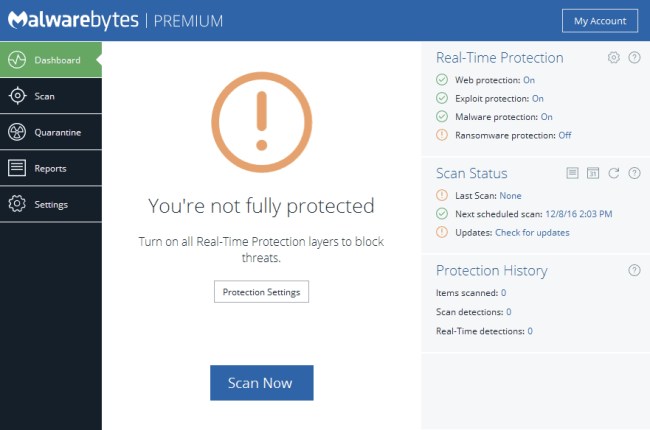 Presented in partnership with Malwarebytes

You know when your body gets infected with a virus and you feel all sorts of crummy and tired and slow functioning? Yeah, it’s a really crappy feeling that leaves you reaching for as many fluids and meds as possible to get better as fast as you can.

Now imagine that same thing happening to your computer or phone nearly every single time you use it, with viruses infecting the devices you use the most, slowing down the productivity and causing a whole bunch of bad things to happen internally that you can’t detect. It’s not a good look — and can lead you to the brink of serious frustration when it happens.

Luckily, there’s Malwarebytes, which offers a free download to help prevent all sorts of malware from getting into the “bloodstream” of your computer and phone, protecting it from damaging viruses.

So, what exactly is Malwarebytes? It’s a super smart technology that crushes malware, making sure all your devices run as smoothly as possible. It’s cybersecurity smart enough for your Mac, PC or smart phone, which can ease all concerns about what might be impacting the speeds and performance of your machines.

Look, having malware protection isn’t something groundbreaking, but the way it’s executed sure is — and Malwarebytes does it better than anyone else. While traditional antivirus helps protect, it can fail because it’s slow to react to new threats. Thanks to the multiple layers of technology that Malwarebytes uses — like anomaly detection (a cool sort of artificial intelligence), behavior matching and application hardening — it crushes malware before it even knows what’s coming.

What If A Device(s) Is Already Infected By Malware?

Unfortunately, there’s a good chance one (or numerous) devices you regularly use is already infected with some sort of malware. Hey, that’s just the nature of the beast. But don’t fret, because a FREE download of Malwarebytes will clean up an infected machine better than traditional antivirus; while also stopping threats from new hackers and malware. Thanks to the only “flawless” clean-up score from AV-TEST.org., you have peace of mind that you’re protected from everything out there.

Malwarebytes Stops Attacks Before They Even Start

OK, so you know Malwarebytes protects your computer and phone from attacks, but do you know how those viruses even get on there in the first place? From visiting a bad website, accepting a call from a scammer or clicking a malicious link; which sets you up for being hacked. With Malwarebytes’ technology, these attacks are shutdown before they even have a chance to target you, meaning the bad guys have no way of getting into any device you’re using.

Look, being sick sucks, and it causes our bodies to shutdown for a short period of time. But when a virus hits a device like a computer or phone, it doesn’t just get better with some medicine, but, instead, can spread like wildfire and stick around for a long time, impacting the performance of your machines.

So stop opening yourself up for these threats by downloading Malwarebytes for FREE, which is the best way to protect every device you regularly use.