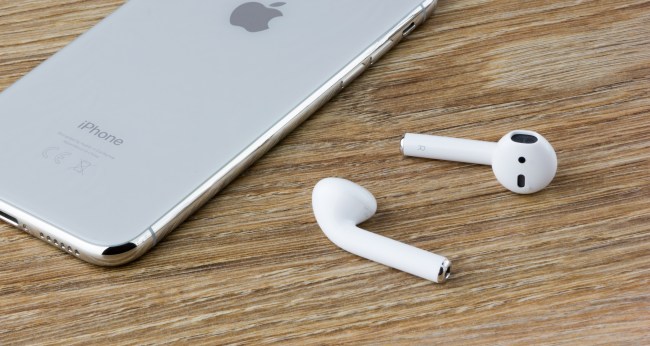 Ever since Apple released their wireless Bluetooth earbuds, aka AirPods, in December of 2016 there have been many stories involving iPhone and iPod users losing them.

Heck, before they were even released for sale, people like Conan O’Brien were already predicting that people would lose them left and right.

That being said, I’m not sure how many people ever predicted that someone would lose one of their AirPods by… accidentally swallowing them.

Not that anyone would have doubted it, because, people, but it would have seemed pretty unlikely.

Just don’t tell that to Ben Hsu, who says he fell asleep wearing his AirPods recently and when he woke up he couldn’t find one of them… because he accidentally swallowed it.

According to The Daily Mail…

Using an iPhone tracking feature he discovered the device was still in his room and heard its beeping sound following him around.

He said: ‘I checked under my blanket and looked around but couldn’t find it – then I realised the sound was coming from my stomach.’

The navy recruiter, from Taiwan’s south-western port city of Kaohsiung, said he did not feel any discomfort.

But he went to Kaohsiung Municipal United Hospital where medics confirmed he had swallowed the AirPod.

Take a wild guess how he got it back?

If you said take a laxative and hope for it to pass through his digestive system then you came up with the same plan of action that Kaohsiung Municipal United Hospital did.

The good (?) news for Ben Hsu is that he managed to avoid having to have the AirPod surgically removed when he passed the earbud the next day.

The bad (?) news is that he fished it out of, ummm, the toilet, and after washing it, he discovered that it still worked.

“The battery was still at 41 percent! It was incredible,” said Hsu, who also called the Apple product “magical.”