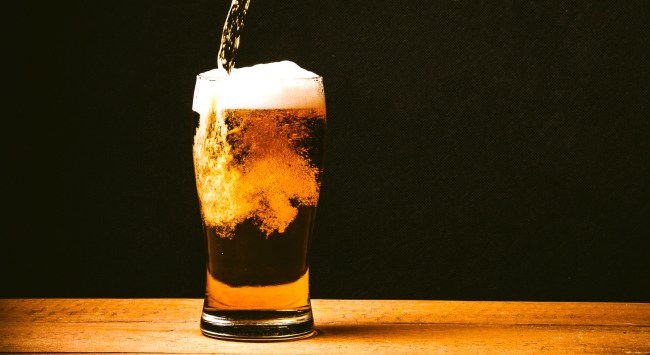 Cincinnati brewery owner Del Hall has good a very different route for Lent this year. Rather than giving up sweets or smoking, he’s given up every food and beverage on the planet, except beer.

That’s right, from Feb. 17 to Apr. 4, Hall will consume a diet consisting of only malt, barley and hops – in liquid form. (With a little water, black coffee, and herbal tea mixed in, for health reasons.)

Why would someone go on a beer-only diet for lent? Or for any reason? In Hall’s case, he is doing it to raise money for those in the hospitality industry that have been affected by the ongoing pandemic.

According to his GoFundMe page…

Del Hall, Ohio’s own Beer Celebrity, who first became Internationally known in 2019 for Living on BEER ONLY for Lent, is raising money in 2021 for Service Workers in Southern Ohio and Northern Kentucky.

The Army Veteran, Brewery Owner, Beer Diet Innovator, and Beer Influencer has leveraged his Social Media presence and vast network of industry relationships and created “SgtDel’s Virtual Tip Jar” where 100% of all donations will go directly to the Staff of Bar & Restaurants that participate.

Starting on February 17th (Ash Wednesday) and lasting 46 Days until April 4th (Easter), Del will not eat anything and ALL calories will only come from BEER. In 2020 SgtDel lost 50 lbs and raised over $10,000 for a local charity in the midst of a Global Pandemic. He’s hoping to lose 40 lbs and raise at least $50,000 this year.

Yes, you read that right. By consuming nothing but beer for a month and a half, Hall is hoping to lose 40 pounds. And he is well on his way.

So far he has lost 40 to 50 pounds in each of the first two years he went on this beer-only diet, plus he says it also lowers his cholesterol and blood pressure. Who knew?!

“The human body is an amazing thing,” said Hall. “We’re used to going through as hunter-gatherers, feast and famine. The problem is we don’t go through the famine anymore.”

When he’s done he will take all of the money he has raised and split it evenly among the establishments that have signed up.

He also will have become a favorite of those in the Uber industry.

“One beer today will affect me way differently than it will in a week,” said Hall, “I kind of really have to stay cognizant of that. Last year I became Uber platinum because I use Uber so much.”