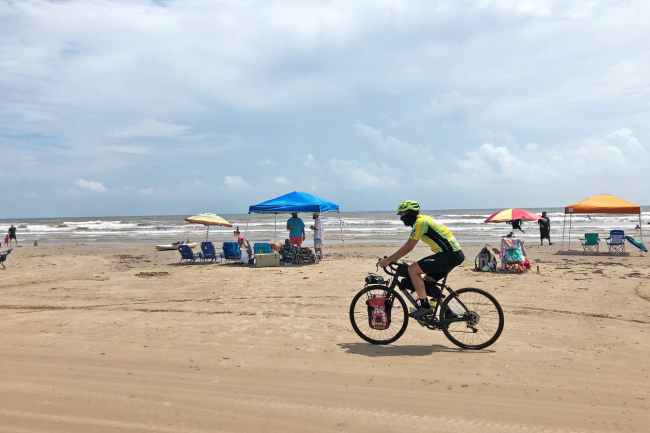 Aaron Chamberlin began his journey to bike around the perimeter of Texas on September 1st. Now, 58 days later, the Austin, Tex. native has completed his 3014.64 mile trek. The final map of his journey left him with nearly a perfect outline of the state.

The inspiration for Chamberlin’s quest came after he completed his goal of biking every street in Austin to the tune of 385 days and 4,900 miles. But he wasn’t stopping there. He researched which roads that he could ride to get closest to the boundaries of the state for almost a year and took off. As far as record shows, it has never been done before. When the COVID-19 global pandemic hit, his ride was in jeopardy and he assumed he would have to cancel. But when July came around, the pieces looked like they could come together, as he would be riding 50+ miles a day by himself, social distancing and working from home.

Chamberlin documented his journey the entire way, if you’re interested. To put his trip in perspective, here are some comparisons:

It is 3,160 miles between Paris, France and Tehran, Iran. It is 2,985 miles to cross the entire country of China from Beijing to Kabul, Afghanistan. Perhaps the most astonishing; it is 3,000 miles from Bangor, Maine to Quartzsite, Arizona.

Yep, to outline the entire state of Texas, Chamberlin essentially biked across the vast majority of the United State of America. And he did so with 52 active days and only 6 days of rest. Pretty impressive, if you ask me.