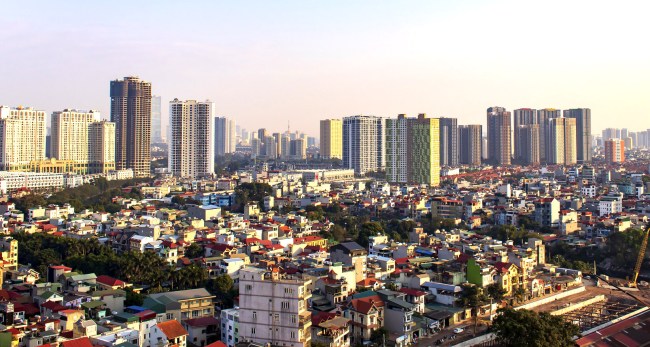 Delivery driver Nguyen Ngoc Manh is being hailed a hero after he somehow managed to miraculously catch a toddler that was falling from a 12th floor balcony at an apartment complex in Hanoi, Vietnam.

Manh, 31, says he was pretty shook up after saving the three-year-old girl’s life, not to mention the fact that his arms were still sore from the incredible catch.

After the ordeal he was at a loss for words to describe what he was thinking as the incredible rescue took place.

It all began as Manh was sitting in his car and heard the shouts of people in fear as the toddler climbed on to the outside of the balcony on the 12th floor.

Curious about all the commotion and hearing the child’s cries, Manh rolled down his window and looked up, spotting the girl dangling from the 12th floor balcony.

It was then that he sprang into action, climbing a 10-foot tall shed, positioning himself where he believed the toddler would land.

“I scaled the wall and saw that she could fall onto the metallic roof of the house used to store electric generators for the complex, so I tried to climb on top of it,” Manh told VN Express. “I made it, but couldn’t stand firmly as the roof was crooked.”

As the girl began to plummet, Manh’s footing slipped, but he was still able to fling himself forward and catch her with the impact leaving a dent on the roof of the shed.

“She looked so much like my child at home,” said Manh. “I was so confused, only able to tell her ‘please, please, I’m here now.'”

The entire scene reportedly played out in rapid fashion.

A three-year-old toddler survived a fall from the 12th floor in #Hanoi, #Vietnam but unfortunately sustained serious injuries to her legs.#anews pic.twitter.com/YQe2DZZOoM

“Everything happened within a minute. I didn’t understand how I could scale the roof that quickly. I couldn’t believe I saved the girl’s life,” said Manh.

The girl, who fell approximately 155 feet, ended up only suffering a dislocated hip, according to doctors at National Children’s Hospital.

Manh says that after turning the girl over to a security guard he left the scene quickly, not even leaving his phone number with authorities.

It wasn’t long, however, until the media tracked him down to share his heroic story.

As a result, Manh says people have been sending him gifts, including money, all of which he has turned down as he doesn’t consider himself to be any kind of hero.

Pretty sure that’s almost the exact definition of a hero.