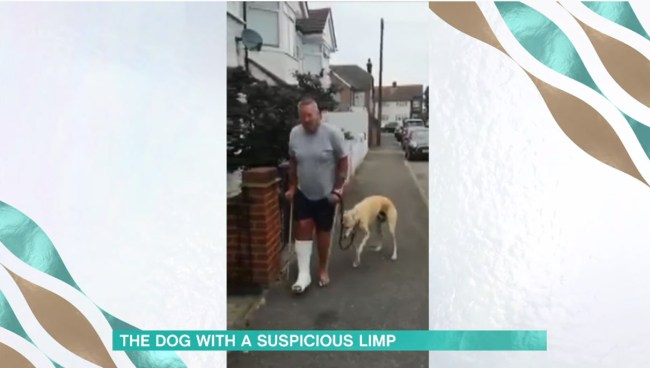 London man Russell Jones was starting to get concerned that his dog Billy was limping, but he couldn’t understand why.

So, naturally, he took Billy to the veterinarian for a thorough checkup.

Turns out, after dropping £300 ($409) on scans and x-rays there was nothing wrong with the eight-year-old Lurcher, baffling Russell and the veterinarian.

However, it seems that Billy only limped with he was around Russell and only since the day after Mr. Jones had broken his ankle and was put in a cast.

After thinking about it, the veterinarian realized that Billy was just faking his leg injury to be more like his owner.

Jones posted a video to Facebook showing his dog limping along beside him with the caption, “Cost me £300 in vet fees and X-rays, nothing wrong just sympathy. Love him.”

Russell and his wife Michelle talked about Billy’s sweet little con this week on This Morning.

“As I was limping around the house, Michelle noticed that he was sort of copying me, really, and then brought a concern that he might have something wrong with his foot,” recounted Russell.

When they took Billy to the vet, Russell, says, “He walked in normally, believe it or not. Then they came out and said they couldn’t find anything.”

Then, as he got home, Billy started limping again.

Michelle got suspicious of Billy’s “injury” when Russell was away and she and the dog were in the garden and he was running a full speed around the lawn. They then showed a video of Billy at full-throttle, getting quite a laugh.

Russell added that when he borrowed his dad’s mobility scooter to walk Billy, Billy stopped limping because Russell wasn’t.

Too funny. And too sweet.