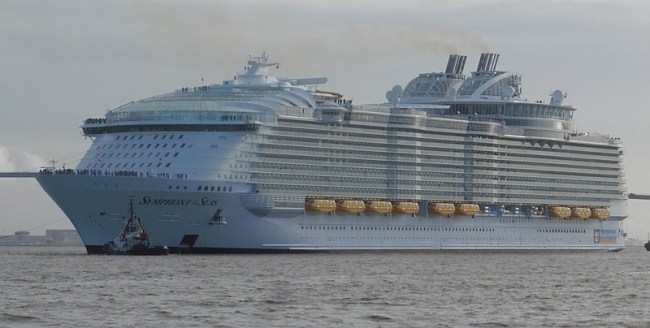 Previously, we’ve given you a visual tour of Symphony of the Seas, the world’s largest and most expensive cruise ship. For some reason, one passenger on the $1.35 billion Royal Caribbean cruise ship thought it would be a prudent idea to jump off the largest cruise ship and then an even better idea to post a video of his leap online.

The Symphony of the Seas is 1,184-feet long, is 238-feet high, and has 18 decks. Guest rooms are between Deck 3 through Deck 14. Earlier this week, a passenger jumped into the water from the balcony of his room on the 11th floor. With friends cheering him on and recording the extremely idiotic stunt, Nick Naydev jumped from the balcony and into the water.

The massive cruise liner was docked in Nassau, Bahamas when the dangerous exploit went down. The jumper, who is from Washington state, admitted that he was “still drunk from the previous night” and “when I woke up, I just decided to jump.” Well, color me shocked. However, the crew of the Royal Caribbean mega-ship were not impressed by his jump. Nadev said his “plan was basically to swim to shore but when I got back to the dock, they told me I need to get my stuff and leave the ship.” A small ship picked him up in the water.

While his friends were cheering and laughing during the stunt, they weren’t laughing for long because they got kicked off the ship too. “My whole group got kicked off,” Nadev wrote. “And I got banned for life [from the cruise line].” The cruise line booted them from the ship and did not provide a refund or financial assistance to get home because they were in blatant violation of Royal Caribbean’s terms and conditions.

The Instagram video shows the stupid jump, but somehow missed Nadev actually hitting the water. Cameraman, you had one job. Also, Nick’s legs are flailing like the arms of one of those inflatable air dancers you see at car dealerships. Probably should have kept his legs together as he hit the water. RIP Nick’s nuts.

Nadev’s friend Konstantin Kryachun posted an Instagram Story documented the full jump with the splash into the water as well as being interrogated and being kicked off the Symphony of the Seas. “He’s jumped from those kind of heights before, and we didn’t really care about the consequences with the cruise company,” Kryachun said. “We just wanted to get a video of it and make it go viral.”

Nadev admitted that he “did not think this through” before he jumped off the biggest cruise ship in the world. No sh*t. “I am truly astonished at how this video has spread throughout the internet,” Nadev said. “My idea was this would be a good laugh for my friends and I would just swim back to shore and continue my vacation and never thought this would be this serious.”

“Local police in Nassau, Bahamas were called in to pick us up from the ship, but fortunately the police thought the whole situation was amusing and did not proceed to file any legal actions,” the 27-year-old Naydev said. However, Nadev would be in pain for days for the dumb jump. “My feet were actually fine. It was my neck and tailbone that hurt,” he wrote. “Could barely walk for 3 days and could barely sleep from the pain. I’m good now.”

“This was stupid and reckless behavior, and he and his companions have been banned from ever sailing with us again,” a spokesperson from Royal Caribbean said. “We are exploring legal action.”

A lifetime ban pales in comparison to the grim reality of what could have transpired. On Royal Caribbean’s Harmony of the Seas, a 16-year-old boy attempted to access one stateroom to another by climbing between the balconies of the two rooms. On January 11, Laurent Mercer fell to his death from the 8th deck of the ship. The boy fell from the balcony onto the pier at Labadee, Haiti.

We get it, you want a viral video for the Gram. But don’t endanger your life and possibly the lives of others for a f*cking Instagram video. Go viral on Instagram with a photo of an egg like a normal person.