2021’s Map Of Each State’s Favorite Halloween Candy Still Has Circus Peanuts On It?! 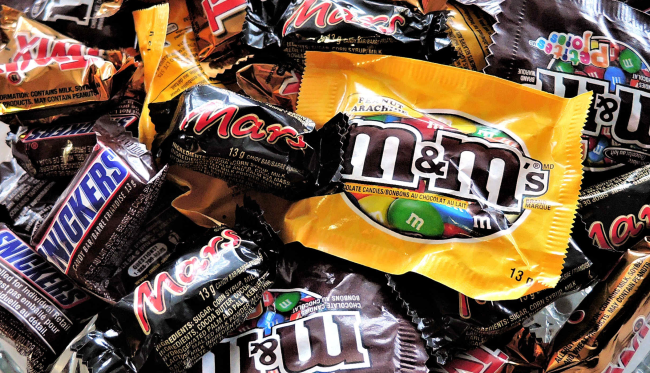 It’s taken awhile, but we may finally be about free from the scourge that is candy corn during the Halloween season.

Slowly, but surely, the annual maps of each state’s Halloween candy have been less and less represented by the waxy abomination.

By 2020, it was gone completely. For some reason we were still dealing with New Hampshire claiming to love circus peanuts, but it was progress.

Related: Here’s What Your Choice Of Halloween Candy Size Says About You, According To Economists

Now, job hunting site Zippia has released the 2021 edition of the favorite Halloween candy for each state map and yep, there it is again: candy corn. Why do you have to be that way, West Virginia?

Also, Oklahoma still thinks circus peanuts are delicious, which is a problem that deserves an investigation, but at least no other state has them at the top.

Last year, Nebraska and Washington had salt water taffy as their favorite, but they’ve wised up in 2021 and have turned to Tootsie Pops and Nerds respectively, two more reasonable candy selections.

Here’s some more stuff they discovered…

• Last year’s favorite Starburst was dethroned by Kit Kats and Twix bars.
• The winner is in, and between chocolate and non-chocolate candy, chocolate narrowly win.
• 28 states prefer chocolates candies while 22 prefer gummies, fruit-flavored candies, and other non-chocolate candies.
• Shout out to Ohio for knowing Reese’s Peanut Butter Cups are the TRUE reason for the season.
• If you ever wondered who likes those little orange and black wrapped candies deceptively titled “peanut butter kisses,” the answer is, while not their favorite, South Dakota likes them best.
• Some other weird choices? Tennessee munching on Runts and Colorado’s passion for Black Liquorice.
• Unsurprisingly, candy searches soar in October.
• Idaho, Maine, and Mississippi are for Dums Dums. The stick candy that is. 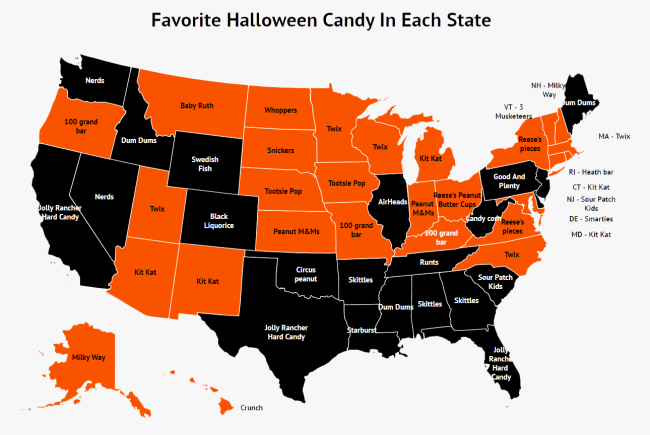 Using Google Trends, we determined which states were the most avid fans of each candy. We examined 50 different popular (and some infamously unpopular) candies, given us a range of candies that puts any grocery store shelf to shame.

From there, we determined what candy is searched a disproportionately, high amount. For example, while Tennessee eats all the candies the rest of the country does, the search interest in runts is excessively higher than the remaining states- making runts more popular in Tennessee than anywhere else.

We, being sane reasonable humans, excluded gum from our candy list. Gum isn’t a candy. Similarly, we excluded raisins, fruit snacks, and other things people try and pass off as candy to unfortunate trick-or-treaters. There is a reason some houses get egged on Halloween and it’s because they aren’t giving out treats.

That, or they’re still handing out candy corn. One of those things.