Here’s What Your Choice Of Halloween Candy Size Says About You, According To Economists 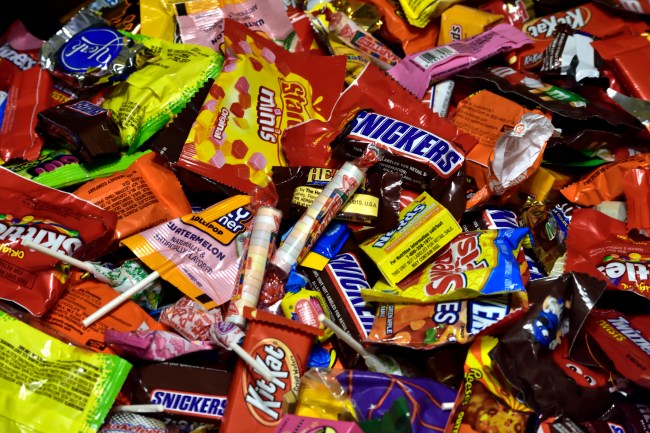 I don’t know if you’ve heard but Halloween is this week on Thursday, October 31st, 2019. You might’ve noticed that the drunk dude in your office showed up with the remnants of leftover facepaint on Monday, unable to wash his costume off from this past weekend when most people celebrated their Halloween parties.

But the big event is on Thursday with millions and millions of kids dressing up and going door to door with bags, asking for candy along the way. We’ll see local news fearmongering headlines of people passing out drugs in the Halloween candy, even if it’s not true, and we’ll see stories of people throwing eggs. But on a personal level, we’ll get to know which of our neighbors are rocking the Big Swinging Richard™ and which ones are cheap.

I fall into the latter category, but not entirely. Like 85% of the population, I opt for the small-sized candy but I also buy a metric ass-ton of the stuff so I can give out a bunch of pieces to every kid that knocks on the door. They’re small, they see quantity over quality. As far as I’m concerned, kids don’t need full-sized candy because they’ll get bored of a jumbo candy bar halfway through and move on to the next item when they have every flavor of candy to choose from.

What is it about that 15% of the population that drives them to hand out full-sized candy on Halloween? Is it that they’re richer than everyone else? Spoiler alert: it’s not, not entirely.

This article over on Fortune consulted with behavioral economists to determine why some people pass out jumbo/full-sized candy and here’s what they found:

Stores signal expectations to the consumer by what they display, notes Wharton professor of marketing and psychology Deborah Small. A recent visit to a Skokie, IL-area Costco found boxes upon boxes of full-size Starburst and Skittle varieties and 30-count boxes of Hershey bars, Reese’s peanut butter cups and Kit Kats. Amazon, under its “The Halloween Store” banner, is stocking these variety packs of full-size candy in bulk quantities.

A trip to the store to stock up on Halloween candy sends one signal, so does eyeing what our neighbors are handing out or seeing what your child brings home in their treat bag. What you then hand out to trick-or-treaters can then become less about handing out the mini Twix that you secretly love and more about keeping up with the Joneses. Much of what we do is dictated by social norms and by comparison, no one wants to look cheap, says Deloitte behavioral economist Susan Hogan.

The general gist here being that if your neighbors are giving out small candy then so are you. If they’re all balling out with the full-sized bars then you should do or else you risk coming off as the cheap neighbor.

Some people are cool with not caring about how they’re perceived by their neighbors and others are like my wife who will spend all afternoon tomorrow making the entryway to our house look immaculate so people see a perfect household when we open the door to pass out candy.

Here’s what else these behavioral economists found:

Small agrees that people might feel a small compulsion to show off, or at the very least, not be perceived as less than. However, what you give out is much more than a display of wealth status. Your Halloween treats can signal not just what you have, but aspects of your character, such as your generosity. “A lot of this has to do with social signaling and how they want to look to others and how people want to look is complex—high status and wealthy and caring and moral,” Small said. (via)

That’s pretty self-evident, I guess. If you want your neighbors to think you’re rich then you need to take steps to project that and the only way to do so is a display of wealth in some form or another. Candy’s a pretty weird flex but in a community event like trick-or-treating it’s certainly a way to show your neighbors what’s up.

It’s also a moment that does foster a sense of community among neighbors and neighborhoods, like the house in San Francisco that gives out Toblerones because the house is now surrounded by blocks of similarly festively-decorated and generous treat givers. “Halloween is a ritual that is fairly uniting,” Hogan said. “Maybe it’s something people cling to, this one nice thing. Let’s go all out for this ritual [that shows] what we do on the front side of our door versus the back door.” (via)

As for what you should give out this Halloween, Hogan says your choice should be dictated less by what your neighbors are doing and more by what expectations you’ve already set. The behavioral economist says customer dissatisfaction spikes more with companies who have generous reward programs that they can’t maintain than with companies with no reward programs at all. Disconfirmation theory shows our satisfaction is very subjective, she says, it’s not absolute, but driven by what we expect. An act of first-time generosity and then subsequent downgrade to market norms can be a disappointment. (via)

I definitely see this as a double-edged sword. As I mentioned above, I prefer giving out lots of little candy versus one large item. But if I were to opt for the large candy then it becomes an obligation that I’m stuck with every year or I risk disappointing the young kids in my neighborhood. I genuinely enjoy giving out candy because the kids love it and that’s infectious.

I don’t want to create some sort of world where I start giving out jumbo-sized candy bars and our house becomes a must visit stop along a route, and if we happen to be out of town like last Halloween when I was in Las Vegas seeing Phish then I make a bunch of kids sad. So I’ll stick with large quantities of small candy.

To read the full article on Fortune, you can click here.