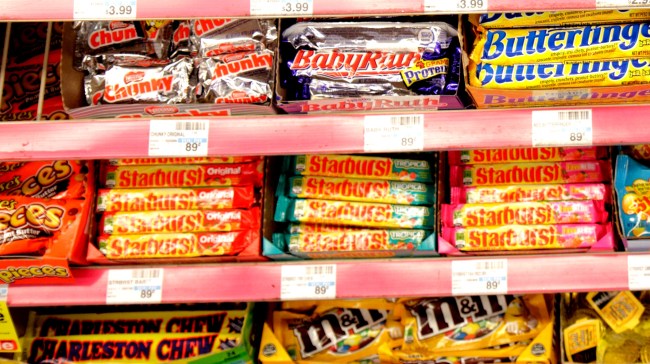 Tis the season so the annual map showing each state’s favorite Halloween candy is back and this year it, FINALLY, reveals people are sick of candy corn.

The last time we took a hard look at each state’s favorite Halloween candy was in 2018 and we had some issues with states like Idaho, Nevada, New Mexico, Alabama, Rhode Island, and Michigan for ranking candy corn at the top.

Especially since in a different survey of 40,000 people candy corn was ranked as the second worst Halloween candy of all time (right behind circus peanuts).

Don’t even get us started with Nebraska and Washington. Salt water taffy? Really?

This year at least, according to job hunting site Zippia, not a single state in America chose candy corn.

And yet, there sits New Hampshire with circus peanuts inexplicably being ranked number one.

Some other highlights include…

• Starburst is a favorite with 6 states loving the fruity squares above all else
• The winner is in, and between chocolate and non-chocolate candy it’s a…toss-up.
• 25 states prefer chocolates candies while 25 prefer gummies, fruit-flavored candies, and other non-chocolate candies.
• If you ever wondered who likes those little orange and black wrapped candies deceptively titled “peanut butter kisses,” the answer is Connecticut. Really, Connecticuters? You’d rather have those tiny-unpleasant tasting bricks than a Reeses Peanut Butter Cup or Crunch bar?
• New Hampshire isn’t much better, loving Circus Peanuts more than anyone other than my grandma.
• 4 states favorite candy comes on a stick
• Iowa may be home to the most candy lovers- In addition to Starbursts, they like Jolly Ranchers, MMs, and Twix the best.
• Unsurprisingly, candy searches soar in October.
• Missouri is for nerds and Alaska is for smarties. Or the candies anyways. 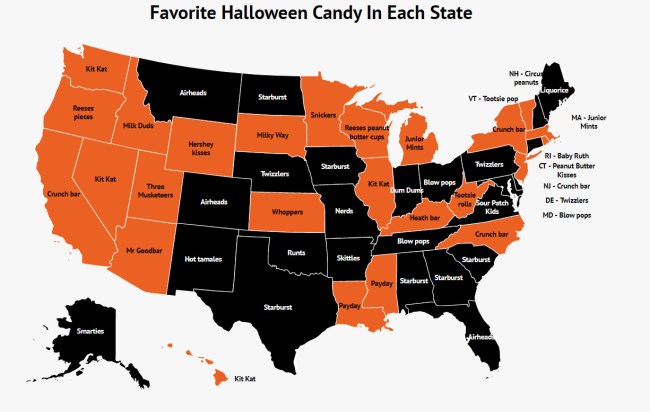 Might want to keep a sharp eye on folks in Maine this time of year.

Here’s how they came up with the map: “Using Google Trends, we determined which states were the most avid fans of each candy. We examined 50 different popular (and some infamously unpopular) candies, given us a range of candies that puts any grocery store shelf to shame.

“We, being sane reasonable humans, excluded gum from our candy list. Gum isn’t a candy. Similarly, we excluded raisins, fruit snacks, and other things people try and pass off as candy to unfortunate trick-or-treaters. There is a reason some houses get egged on Halloween and it’s because they aren’t giving out treats.”

Works for me. Now about those circus peanuts, New Hampshire…