For some reason, since the advent of the internet, people have become much, much, MUCH more interested in learning about and spreading various conspiracy theories.

According to Dr. Karen Douglas, a professor of social psychology at the University of Kent in the UK, “if we can’t say for sure that social media has increased conspiracy theories, it’s certainly changed the way in which people access this information, the ways in which they share this information, and also I feel that in many cases, for people who do have, I guess, an underlying tendency to believe in a particular conspiracy theory or conspiracy theories in general, it’s much easier for people to find this sort of information now than it ever has been before.”

So, with all all cleared up let’s take a look at the most searched conspiracy theory in each of the 50 states as determined by a study conducted by USDirect and see what conspiracy theories folks are most interested in using to satisfy those three psychological motives.

Either most of the country is very worried about a militaristic, totalitarian government that involves the Freemasons, Illuminati, the United Nations, the Bible’s Book of Revelations, and/or the Denver Airport, or people are still really into 1990s World Championship Wrestling.

One of the more benign conspiracy theories out there, that New Coke was either (a) an elaborate plan to mask the replacement of real sugar with high fructose corn syrup, (b) intentional on the Coca-Cola Company’s part to boost sales, or (c) was used to cover up the final removal of coca to satisfy the Drug Enforcement Administration, is apparently still of grave concern to a handful of states in America. Why is still of any concern to Americans in 2021 is the real mystery, however.

Weather control, biological and chemical warfare and testing, psychological manipulation, sterilization and population control, spikes in respiratory illnesses, and life expectancy reduction are all things being blamed on chemtrails.

This is of grave concern to the citizens of Oregon, Idaho, Nevada, Lousiana, and West Virginia as Chemtrails is the most searched conspiracy theory in those states, for some reason.

UFO sightings, crop circles, men in black, and alien abductions, the New World Order? What is up with all of those unmarked black helicopters?

The residents of Illinois, California, Missouri, and Maryland really want to know the answer to that question.

Utah, Colorado, Wyoming, South Dakota, and Vermont apparently still has some Flat Earthers in their midst. Either that or they are worried that satellite images of the globe from space have been doctored by NASA and other government agencies to trick them into believing the Earth is round. Why they would do such a thing is a whole other question.

Ohio apparently just can’t let it go. Despite decades of discussion on the topic, citizens of the Buckeye State is still delving into whether or not the moon landing was a hoax perpetrated by NASA and the American government back in 1969.

The state of Washington was the only one to come up with Lizard People as the most searched conspiracy theory in their state, but what are Lizard People exactly?

According to USDirect, Lizard People, also known as “reptilians,” “reptoids,” and “draconians,” they are humanoid beings who are described as shapeshifting aliens that take on human forms and hijack seats of government and political power to assume control over human societies. Yikes. No wonder they are worried.

Yes, yes, we know. Tupac is still alive. No question.

But what do people in the state of New Mexico know that we don’t?

For some reason, landlocked North Dakota is apparently still concerned about the 2010 catastrophic failure of offshore oil rig Deepwater Horizon. Was President Barack Obama secretly behind it? Did some eco-warriors sabotage it? Did the rig’s drilling wake up a long-buried UFO? North Dakotans want to know. 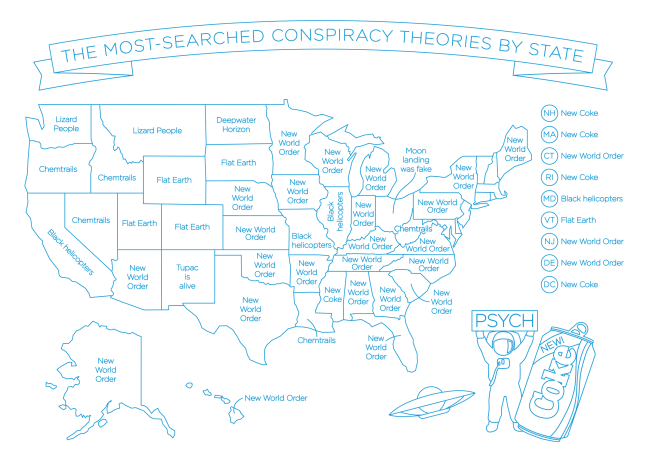