Attention ’90s Kids: ‘Double Dare’ Is Coming Back This Summer And We Asked Marc Summers About His All-Time Grossest Stories 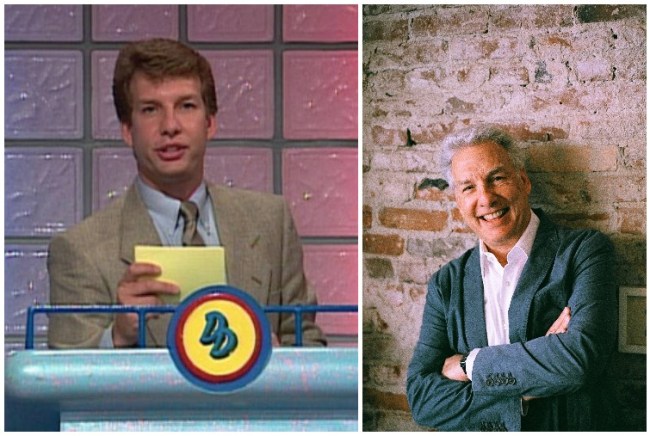 If your childhood in the ’90s was anything like my childhood in the ’90s, Marc Summers and the whacky antics of Nickelodeon’s Double Dare were on constant after-school rotation in your household. Double Dare was a pioneer in the kids game show genre, paving the way for GUTS and Legends of the Hidden Temple with it’s stomach-churning food challenges and gratuitous use of slime. It enjoyed one of the longest runs Nickelodeon show history, airing hundreds of episodes from October 1986 through 1993, with Summers hosting the show in it’s prime on a soundstage at Universal Studios, Orlando. It’s enjoyed quite a few incarnations since, including Family Double Dare and Double Dare 2000.

Nickelodeon is bringing back the obstacle course this summer, reviving the classic game show for 40 brand-new episodes. This makes sense, when you think about the cross-generational appeal: Millennials who grew up watching their peers race against each other on the The Sundae Slide, Giant Human Nose, and One-Ton Human Hamster Wheel now have kids of their own who can enjoy such shenanigans.

Before the next gen of Double Dare heads to TV,  Marc Summers will team up with MTN DEW Kickstart to debut a special Double Dare course at Clusterfest in San Francisco, complete with opportunities for attendees to run the course.

From June 1 – 3, event attendees can quench their thirst for messy, nostalgic fun by racing through iconic “Double Dare” challenges and DEW-themed obstacles – featuring interactions with surprise celeb guests and culminating in a one-hour, livestreamed special airing on June 3.

The Blue Team and Red Team will feature legendary cast members from MTV’s “The Challenge” including Chris “CT” Tamburello, Jenna Compono, Leroy Garrett and Kam Williams as well as Comedy Central comedians including Haha Davis – who will take on the challenges head-to-head.

Stick my head up the iconic snotty Double Dare nose as a hairy dude with a dad bod in my 30s? WHERE DO I SIGN UP?!

I loved Double Dare growing up, so I couldn’t resist an opportunity to chat with Marc Summers about the revival. You can listen to our full conversation my new podcast, SO STUPENDOUS, now available in the iTunes Podcast app. The specific part with Summers starts around the 9-minute mark.

A couple fun takeaways from my conversation with Marc, if you grew up watching the show. I asked him about specific moments he was grossed out hosting the show, specifically with food. In his own words, which you can listen to via the Podcast app:

“Physical challenges have to be tested and they tried to mix them up. At the time, they were trying to make them as semi-gross as they could. I have this thing – If you open up a can of any dog food, I have to leave the country. The wafting odor of a can of dog food makes me nauseous. They were trying to do a physical challenge with canned dog food and, literally, I had to leave the stage – I thought I was going to lose my lunch, beyond anything. They had to switch it out for me.”

Marc continued with another anecdote from an episode with baked beans. I’ll never look at can of BUSH’S the same again without thinking about this smell. Thanks, human brain and it’s miraculous olfactory recall system:

“When we first started the show in Philadelphia, we filled the tank with styrofoam and all sorts of different things – Once we filled it with vanilla pudding, believe it or not. But once we filled it with 4,000 pounds of baked beans. Imagine – How do you even get enough material to fill a tank of that sized with 4,000 pounds of baked beans? We did. Think about an old school cafeteria. After three or four days of something sticking around, it starts to smell a bit ripe. Well the beans, after day three, started this smell that was just… god-awful. So we realized we were going to have to clean out the tank and put a new substance in there. The question is, no one thought about how you get the beans out of the tank. So we tried shoveling them out and putting them in garbage bags, but the beans were so heavy the bags started to break. We were shooting on a local TV set and the station affiliate was getting angry. So someone came up with the brilliant idea of calling one of those portable local toilet septic companies for construction sites…. So they got into the tank with hip waders and sucked the beans right out of the thing.

The picture, I can’t get out of my mind. The smell continued for about another week before we could open the doors and have a weekend with no food in the place.

Those are the two that stand out.”

That is a CRAZY mental image. I’m dry-heaving at the very thought of the rotten stench of 4,000 pounds of baked beans spoiling on a lukewarm TV set for days, then re-gagging at the thought of a gross poop-pump truck pumping spoiled beans from a game show tank.

There are some more great stories in my interview with Marc, including him talking about how crazy his laundry was for Double Dare. Listen to our full conversation my new podcast, SO STUPENDOUS, now available in the iTunes Podcast app. The first episode of SO STUPENDOUS also includes interviews with Jay Leno and NASCAR driver Joey Logano.

The specific part with Summers starts around the 9-minute mark.