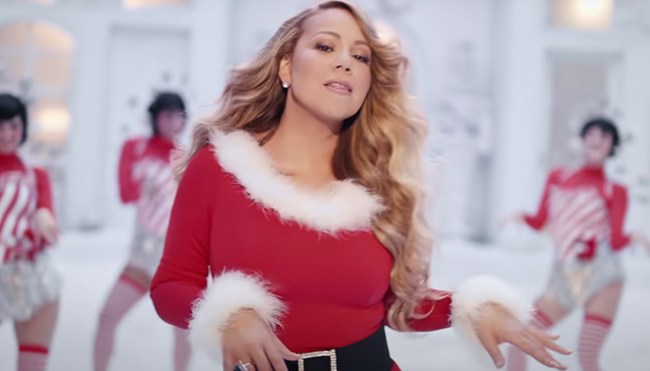 Based on what plenty of people would lead you to believe, culture warriors have spent decades engaging in a War on Christmas that rivals the futility of the War on Drugs that’s still being waged by those on the opposite end of the political spectrum, as the holiday has emerged fairly unscathed in the wake of the many assaults it’s been subjected to.

Despite their best efforts, the guerilla army of Grinches waging this campaign has been unable to gain much ground in this uphill battle. You can point to a variety of factors to explain why this is the case, but you can’t overlook one of the most formidable weapons the Christmas Powers have in their arsenal: Mariah Carey.

Over the years, overeager retailers and marketers have routinely come under fire for the premature sales displays and promotions that have contributed to a phenomenon dubbed the “Christmas creep,” However, there are a few beloved aspects of the holiday that seem to get a pass when it comes to abiding by the Christmas embargo that’s traditionally lifted on the day after Thanksgiving.

This includes “All I Want For Christmas Is You,” the Certified Bop that Mariah Carey dropped on an unsuspecting world in 1994. The holiday anthem is one of the rare modern additions to a Christmas music canon that largely consists of songs first recorded when owning a television was a luxury, and there’s no better testament to its staying power than the fact that it secured the top spot on the Billboard Hot 100 in 2019.

The jury is still out on exactly how soon is too soon to start bumping “All I Want For Christmas Is You,” but Carey testified on her own behalf on Monday morning when she dropped a video plugging the track as soon as Halloween officially gave way to November 1st on the East Coast.

As you can see, her decision to kick off “All I Want For Christmas Is You” Season as soon as she did was a fairly divisive one that generated plenty of reactions online.

The entire month of November: pic.twitter.com/KDCBZSfATG

someone needs to save us from the yearly pandemic that is mariah carey i cant do this anymore… https://t.co/aT88JVNJRv

The harvest festivals are fallen. The turkeys go unroasted.
The pie crusts linger empty as the sweet rolls sit untoasted
And all the cornucopias of plenty and abundence
Are swept away like fallen leaves, the victims of redundance. https://t.co/34ruDWLP4G

Mariah please release my family. I put up Christmas lights at 12am November 1st just like you asked. https://t.co/0JknlwqoPK

new record for the earliest celebration of Christmas

Based on the “11/5” emblazoned on one of the presents in the video, it looks like Carey has something special she’s planning to unveil on November 5th, so you might want to gird yourself for what the next 54 days have in store.