Hate to be the bearer of bad news, but that Justin Bieber/Marilyn Manson collabo you’ve been always praying for probably isn’t going to happen anytime soon. The two music artists are currently embattled in a feud because of a shirt. And here I thought high school girls cornered the market on getting into fights over clothes.

Last year, Justin Bieber purchased a $195 Barney’s T-shirt with the phrase “Bigger Than Satan… Bieber” embroidered on the back and Marilyn Manson’s face on the front. When the two stars met each other Bieber was wearing the shirt that had Marilyn’s face on it. “He was [already] wearing the shirt that had his name on my shirt, and he said to me, ‘I made you relevant again,’” Manson told Consequence of Sound. “Bad mistake to say to me.” Biebs said the t-shirt “was his idea.”

“He was a real piece of shit in the way he had the arrogance to say that,” Manson said of Bieber. “He was a real touchy-feely guy, too, like, ‘yo yo bro!’ and touches you when he’s talking. I’m like, you need to stand down, you’re dick height on me, ok? (laughs) Alright? So stand down, son.”

“The next day I told him I’d be at his soundcheck at Staples Center to do ‘Beautiful People’,” the goth rocker claims. However, Manson never intended to perform with Bieber, but “he believed that I’d show up, because he was that stupid.”

Bieber and Manson in happier times.

The shirt is designed by Fear of God’s Jerry Lorenzo and was said to be created with Manson’s permission. “Thank you Marilyn Manson for signing off on the ‘Bigger than Satan’ x Justin Bieber tee,” Lorenzo wrote on Instagram in July of 2016. “Thanks for understanding our approach and re-interpretation of your vision. Never would of thought printing on my vintage T-shirt collection would take us this far.”

Apparently, Manson never signed off on the shirt and he said he eventually “took all the proceeds from those shirts from him. They didn’t even fight, they were just like, ‘yea, we already know, we did wrong, so here’s the money.” 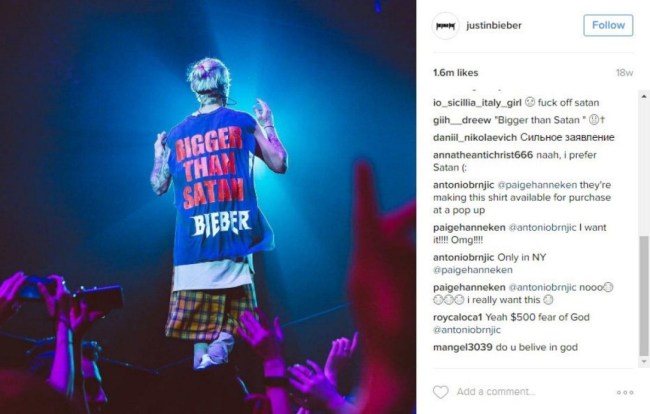 Tough break for the dick-height singer.