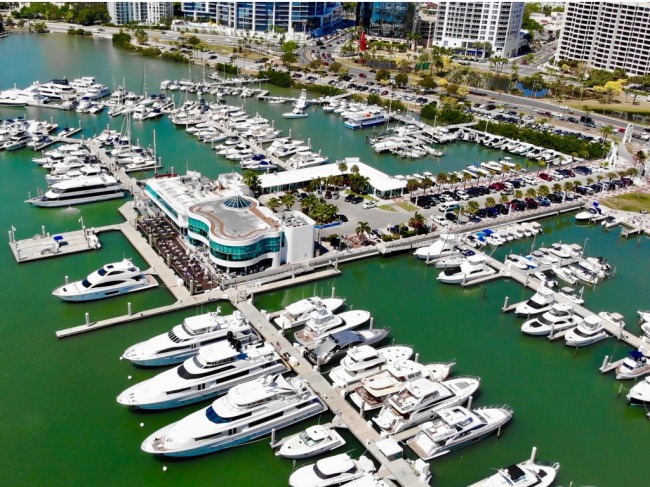 It’s always fun when your hometown is in the news, isn’t it? This incident went down at Marina Jack’s in Sarasota, Florida. The person driving the boat was later arrested and charged with three counts of boating under the influence and property damage but that doesn’t even begin to paint the picture of what went down.

I woke up on Sunday morning to a bunch of group texts with ‘did you guys see this???’ as the clips from the incident started going viral. The clips show this dude on a luxury yacht straight up ramming other boats. Coincidentally, the marina where this took place is named in part for my grandfather (Jack Anderson) whose business partner was also named Jack. This is also a waterfront spot I’ve been taking my son to walk around and look at boats (and the wild parrots) since March as a way to get out of the house and OF COURSE I just happened to skip going this past weekend and missed the action.

There are a few clips on Instagram from @TheQualifiedCaptain, an account dedicated to boat ‘captains’ who 100% totally know what they’re doing and aren’t at all causing mayhem. Make sure to check this out from multiple angles because it gets crazier and crazier the more you watch:

The extent of damage to the boats isn’t yet known nor is it known how much damage was done to the docks. What we know FOR SURE is boats are amongst the most expensive hobbies on the planet and those luxury yachts can easily cost more than a 5-bedroom home in a gated community. Fixing boats is a slow and arduous process. They’ll need to be pulled out of the water, put in a drydock, the damage will need to be assessed, and then the repairs will take a LONG time just as we’ve reached PEAK boating season around here with temperatures in the low 80s every day.

WWSB ABC7 news was the first local news station to cover this story:

A man driving a large boat crashed into docked boats at the Bayfront Park Marina in Sarasota early Saturday afternoon.
And it was all caught on camera. Witnesses say, the man driving plunged right into the dock causing damages.
“I just got on my camera I was like ‘oh no it’s gonna believe us I have to start recording,’” said Kayla McLaughlin, who admitted she found it hard to believe what she was recording.
“It was just coming for all the boats and everyone on the boat next to him screaming ‘shut it off, shut it off,’” she recounted. “In a couple of minutes later he goes right into the boats.”

The 32-year-old man who was charged with three counts of boating while under the influence with property damages bonded out of jail at 1:45 in the wee hours of Sunday morning.

I asked around for some insider information and heard from a friend who works at that marina about the nature of the ‘under the influence’ charge but it’s not confirmed so I can’t divulge the nature of that until more is known about this story.