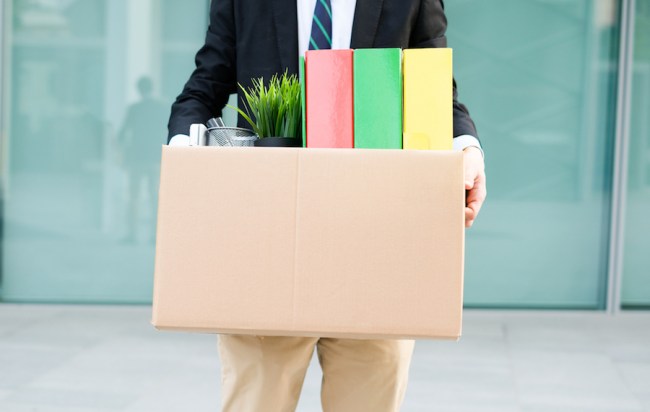 Sadly, this story sounds 100% legit and has probably happened thousands of times to thousands of people. If a company doesn’t want an employee around, they’ll find reasons to get rid of the person.

When I first saw the headline, my mind immediately jumped to this SNL moment…

But it’s not quite as “USA! USA!” as I thought. It’s still kinda crappy though.

A former marketing executive for a high-profile consulting and talent acquisition firm is claiming he was terminated for being “too American.”

And what made Gray Hollett, the former chief marketing officer at Boyden World Corporation, seem too American?

Khakis and a sweater. Among other things.

The former chief marketing officer claims he was unlawfully let go in January 2020 after he complained about discriminatory remarks regarding his age, clothing, and basically not being from Germany like the managing partner of the company.

“It was very upsetting and the kind of the way it happened was quite disconcerting,” Hollett, 61, told The Post in an interview.

Beginning in late 2017, Boyden’s board of directors chairman and managing partner of Germany, Jörg Kasten, started making “frequent derogatory” comments about Hollett’s nationality, saying he was “too American” and needed to be “more European,” the suit says.

“During the course of my employment at Boyden, I became aware that Chairman Kasten, other European partners and Board Members held openly and blatantly discriminatory attitudes towards certain employees at Boyden, like myself, that were born and raised in the United States,” states Hollett’s complaint, provided to The Post.

Hollett said the “discriminatory and hostile … anti-American comments” were a “consistent” gibe from Kasten, a respondent in the complaint, but other European directors at the US-based firm held “anti-American bias and animus” as well, the filing shows.

According to the filing with the Equal Employment Opportunity Commission, Hollett was embarrassed during a November 2017 meeting when Kasten “chastised Hollett for wearing khaki pants, a button-down shirt and a pullover sweater” in the middle of a board meeting.

Hollett was told to be “more like” another executive –  a man in his early 40s. The man and other colleagues of his age constantly dressed in jeans and T-shirts, according to Hollett.

HOW DARE THAT MAN! Khakis are classic business casual. Think of all the amazing leaders who wear khakis on the regular like Jim Harbaugh, Walter White, and the friendly guy at Target who told me where to find the constipation meds.

Hollett figured his time was up during an email exchange with one of his jeans wearing counterparts.

In August 2019, the managing partner for Boyden UK, Nick Robeson, a respondent in the complaint, was upset over a marketing decision Hollett made, the complaint states.

When Hollett explained his decision, Robeson told him his arguments were “outdated” and it was “time to retire,” according to emails attached to the complaint.

After more than 13 years at the company that involved promotions, raises, and positive performance reviews, Hollett was suddenly terminated in January.