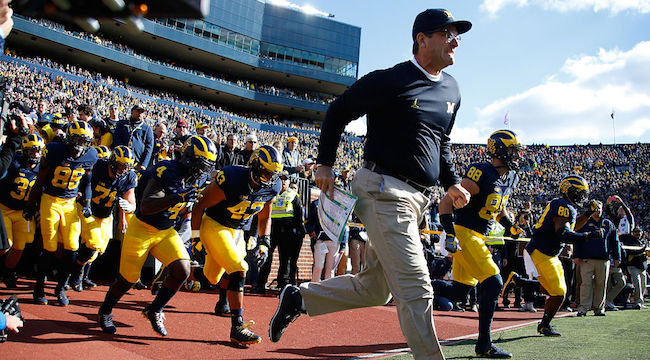 I don’t consider myself much of an expert when it comes to handing out relationship advice, but if I had to give out some words of wisdom, I’d say that you should try to find someone who loves you as much as Jim Harbaugh loves khakis. While other people might not be as passionate about his pants, Harbaugh is so obsessed with them that he even works out in them when he’s not patrolling the sideline.

It’s hard to separate the man who looks to Jake from State Farm for fashion advice from his attire of choice, and after two NFL players opened a brewery, they decided to honor Harbaugh with a beer inspired by his khakis.

According to Busted Coverage, Inside The Five Brewing recently opened in Sylvania, Ohio after former pros Brandon Fields and Chris Morris decided to ditch the whole “football” thing and try their hand at making beer. While they’re only been open for a couple of weeks, they’ve already made their mark with Stained Khakis, an ale dedicated to the coach.

Fields is a Michigan State alumni, so I’m assuming he played a hand in the last sentence of the description.

I can’t think of a better way to honor the famously eccentric coach than making an ale with just a bit of nuttiness.