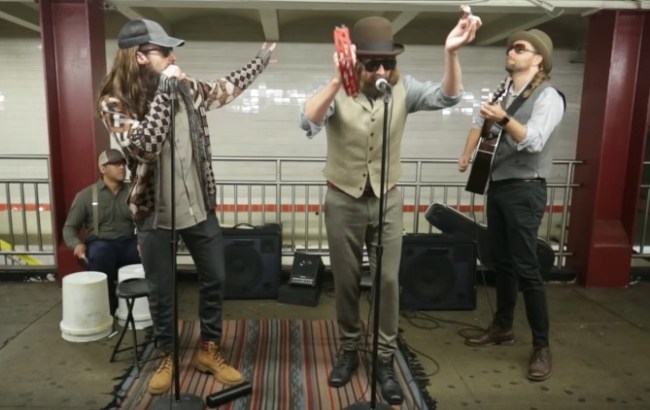 I’ve never been a huge fan of busking in the NYC subway. I get that it’s a great way for musicians to hone their craft, but for anyone other than tourists the subway is strictly a means of transportation. You use it to get from Point A to Point B as fast as possible. And when you’re transferring trains you don’t stop to smell the rats and watch some band in Union Square that’s drawn a crowd. In fact, that crowd’s nothing more than a nuisance because you have to walk through their tourist bullshit and those precious few seconds lost might mean you miss your next train.

My rant aside, I did think this was pretty cool. On The Tonight Show Starring Jimmy Fallon, Jimmy and Maroon 5 snuck down into the subway station below 30 Rockefeller Center and put on a concert in disguise before taking off their fake facial hair and wigs to reveal who they are. The crowd went pretty nuts, and rightfully so because the NYC subway has gone to complete shit under Mayor De Blasio and it’s almost unheard of for something good to happen in the subway:

I’m no Maroon 5 fan but I do enjoy stunts such as this. It certainly made the week of whatever passersby happened to be there when the crew revealed themselves as Maroon 5 and Jimmy Fallon. Also, I’m consistently blown away how someone like Jimmy who has spent his career in Comedy can hang, musically speaking, with professional musicians.