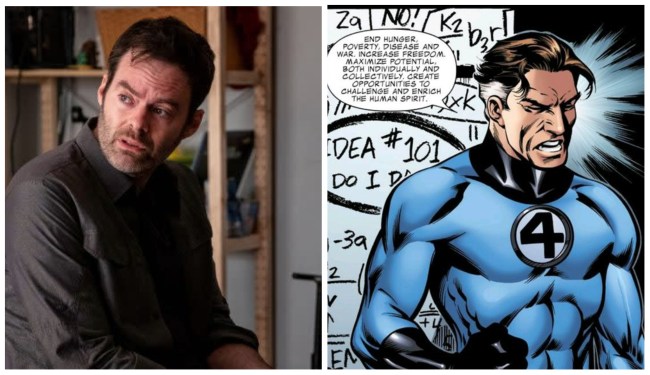 While his endless talent was frequently showcased on Saturday Night Live, even the biggest fans of Stefon likely never imagined what the arc of Bill Hader’s post-SNL career would look like.

Ever since walking away from SNL in 2013, the now 44-year-old Hader has slowly but surely built up his reputation as more than just a genius comedic writer by starring in dramas such as The Skeleton Twins, rom-coms such as Trainwreck, and, of course, hit dramedy series such as his HBO show Barry.

Barry, in particular, has elevated Hader to another level of fame as the beloved HBO series — which was recently renewed for a fourth season (that Hader will direct in its entirety) — has been nominated for 11 Emmys over the years, with Hader winning Outstanding Lead Actor in a Comedy Series in both 2018 and 2019.

The third season of Barry, while once again nominated for Best Comedy Series, was anything but funny. Comedic or not, though, there’s no denying that the series was not only intensely thrilling but deftly directed.

This, ultimately, bring me to my point: with Hader now a proven commodity both in front of and behind the camera, Marvel Studios — in search of both a Mr. Fantastic and a director of Fantastic 4 — should give the Barry star the reins to both.

And then let him direct it, too. pic.twitter.com/0A1flXa3py

Hader not only has the general looks — dark, graying hair and beard — to portray Reed Richards, but he also has the emotional gravitas and the inherent nerdiness that comes with playing the smartest man alive and the goofiness that comes with having your primary power being… stretchiness. Plus, at 44 years old, he’s aged enough to command the respect of his fellow heroes but young enough to play the part for a decade or so.

Perhaps more importantly, though, Hader seems primed to take a leap to the directing big leagues, as widely-acclaimed Barry episodes such as “ronny/lily” and “710N” have proven that he’s not only an adept but potentially brilliant filmmaker. There’s also no denying that Hader has a passion for comic books, as he actually wrote a published Spider-Man comic with Seth Meyers back in 2009.

With the Marvel Cinematic Universe seemingly in need of new stalwart heroes similar to the likes of Robert Downey Jr’s Tony Stark and Chris Evans’ Steve Rogers, Marvel needs to get their Fantastic 4 (and X-Men, for that matter) casting choices spot on, and entrusting Hader with the present and future of the Fantastic 4 franchise would be the first step in doing so.