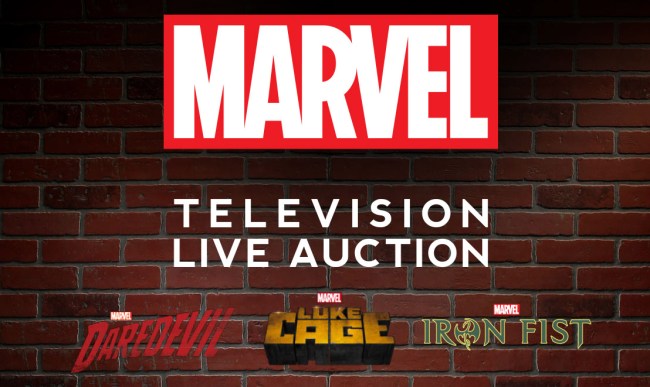 Hmmm… call me crazy, but the fact that Marvel is selling off some of the best props and costumes from their cancelled Netflix shows probably doesn’t bode well for the series’ chances of being revived, right?

I mean, I know that the Disney-Fox deal is officially done (Deadpool has already chimed in on it) so the House of Mouse is now the majority owner of Hulu.

And I know that the Senior VP of Disney said they’d be open to reviving Marvel TV shows like Daredevil, Jessica Jones, The Punisher, Luke Cage and Iron Fist on Hulu.

And I know that Marvel’s Head of Television Jeph Loeb has left the door open for those shows’ return, perhaps on Disney+.

But selling off things like Matt Murdock’s Daredevil suit, Misty Knight’s bionic arm, Luke Cage’s bullet-ridden hoodie, and Colleen Wing’s katana can’t be a good sign. (Though I would really like to get my hands on either Colleen’s katana or Misty’s bionic arm. What do you think they’ll go for? Ten, twenty bucks?)

According to Marvel.com, over 750 lots will be offered in this first of its kind live two-day auction, taking place in August 2019 at Prop Store’s auction facility in Los Angeles County, California.

“Mike Pasciullo, SVP, Marvel Marketing and Communications, said about the auction, “The props and costumes created for these series are the living embodiment of the comics come to life. We’re happy to work with Prop Store to give fans this unique opportunity to own authentic iconic mementos that were used to create these beloved Marvel shows.”

Also among the items for sale over?

Oh man, so the Marvel Netflix shows really are done for.

Damn. They aren’t even going to keep these on display? Aka Marvel x Netflix = OVAH 😭

This is bull crap #SaveDaredevil

People are willing to fight for this show and people are already becoming discouraged over this article. But I will say this is very shitty on @Disney @Marvel especially when you have been giving us this faluse notion that you cared. #SaveDaredevil

I have to agree.

Also… on the plus side?

I really, REALLY hope this means that Marvel is still planning to #SaveDaredevil and that they will get new costumes and props for a revival of this show. A friend of mine who works for MGM/Paramount says that would be standard.