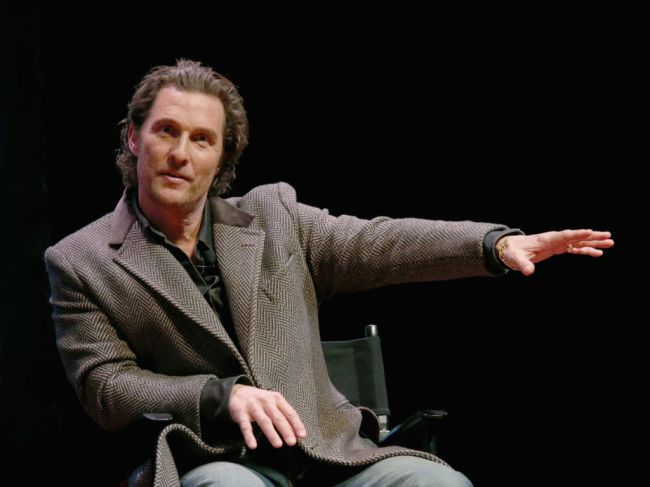 People might not admit the truth but we’ve all got a certain vision for the way we’re hoping to leave this Earth.

Whether it’s in the middle of a favorite hobby, surrounded by loved ones, or just taking one last ride on bike or board, people hope the last few seconds above ground are enjoyable.

In his new book, “Greenlights”, Matthew McConaughey opens up about his dad’s death. In an excerpt from the book, shared by People, the actor recalls the exact moment he found out about his dad dying.

The elder McConaughey passed doing what he loved – Matthew’s mom.

“I got a call from my Mom. ‘Your dad died.’ My knees buckled.

I couldn’t believe it. He was my dad. Nobody or nothing could kill him. Except mom.

He’d always told me and my brothers, ‘Boys, when I go, I’m gonna be makin’ love to your mother.’

And that’s what happened. He had a heart attack when he climaxed.”

McConaughey also told People that his parents had an up-and-down relationship. The McConaugheys were divorced and remarried multiple times.

The actor and father of three admitted that sometimes things got heated between mom and dad.

“They were at times violent,” McConaughey told people. “That is how they communicated. They were divorced twice, married three times. I mean, yeah, it was like the Pacific Ocean in a storm. But those moments were always so quickly 100 percent of the time superseded by the love and the humanity.”

McConaughey’s mom is still alive-and-kicking at 88. His father passed in 1992.

Even with some of the bad still in his head, McConaughey still reflects on the good times, and how it affects him as a father.

“The only thing I ever knew I wanted to be was a father,” McConaughey said. “And it’s remained the pinnacle for me. Being a dad was always my only dream. … I can’t think of anything being more important.”