Ever Wondered What Matthew McConaughey Would Be Like As Thanos? This TikTok Has Your Answer 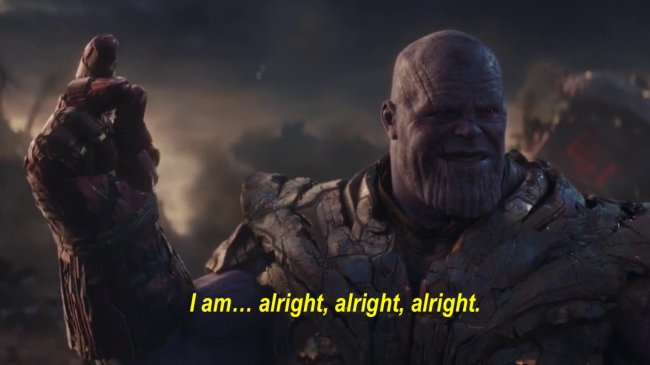 With the arrival of Thanos to the Marvel Cinematic Universe, the franchise was finally given something it largely lacked since its inception: a compelling, terrifying villain.

Despite the obvious and overbearing threat that Thanos posed, though, he was still ruthlessly turned into a meme all the same, because that’s just what the internet does. Remember when everyone was convinced he’d be defeated by having Ant-Man crawl up his ass and expand? Just do a simple Google search of “Thanos memes” and you’ll be presented with an endless stream of hilarity.

It’s now been two years since Thanos was vanquished in Avengers: Endgame, and yet, the character still remains rich ground for the meme-ers and TikTokers of the internet. Take this dude,for example, who brilliantly imagined what the Mad Titan would be like if he was played by Academy Award-winning actor Matthew McConaughey instead of Josh Brolin.

While we’ve likely seen the last of Thanos(although, stranger things have happened — there are *rumors* he could pop up in Chloe Zhao’s Eternals), McConaughey joining the Marvel Cinematic Universe remains a possibility, as the Texas Oscar winner has yet to commit himself to a superhero/comic book movie franchise.

RELATED: The ‘Loki’ Trailer May Hint At Marvel’s Next ‘Avengers’ Project

As for who McConaughey could portray in the MCU, I’d like to see him take on a villainous role, perhaps that of Norman Osborne, who could serve as sort of a “ground level” big bad in the franchise, posing a separate and unique threat from the “galactic” big bad like the soon-to-be-introduced Kang the Conqueror (who’s rumored to appear in the upcoming Disney+ series Loki). There’s also the DC side of things, where I think McConaughey could take on the role of Harvey Dent in Robert Pattinson’s The Batman franchise. Now that would be epic.

Which comic book character would you like to see Matthew McConaughey play? Let us know in the comments below!