McDonald’s Manager Throws Blender At A Customer, Hitting Her In The Face, During Altercation Over Incorrect Order 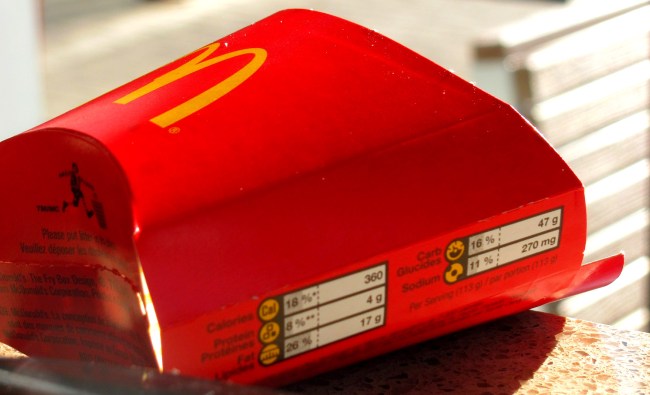 Unfortunately for the woman who was doing the complaining she ended up with some rather significant injuries as a result of the blender toss.

“That was a very unhappy day for me,” McDonald’s customer Britany Price told WLWT.

According to WBOY, Price says she went through the drive-thru and ordered some Happy Meals for her kids. When she received the order it was incorrect so she went inside to complain and get a refund.

After waiting for about 25 minutes to speak to the manager, Price tossed her Happy Meals at the McDonald’s employee when she finally appeared.

“I wasn’t the only one that got frustrated, you know, watching the video we see a lot of people that see me and her talking, trying to resolve the issue and they’re, like, ‘I’m not dealing with this,’ you know. They just left. They didn’t even place their order,” she told WLWT.

That’s when sh*t got real and the manager picked up a blender and hurled it at Price, hitting her square in the face, breaking her nose and cheekbone.

“It’s like, you’re directly ignoring me, so what choice do I have? I don’t have to put up with this. So, I went and got the food, I want my money back and that’s kind of where it all goes from there,” said Price.

When asked if she regretted throwing the Happy Meals at the McDonald’s manager, Price replied, “I mean, I definitely don’t feel like there would have been a different result. I feel like even if we would have just went verbal back and forth that it still would’ve escalated to something else.”

So, no she’s not sorry, and now Price is suing McDonald’s, and the company told WLWT that the manager, Nashawnda Johnson, “is no longer employed by our organization.”

Johnson explained after her dismissal, “She threw a chocolate milk and hit me in the head with it as I had my back turned. So I turn around. Here come the apple juice. Hit me in the face. All the Happy Meals and the brown paper bags. She just started going crazy. So every action has a reaction. So while I’m getting assaulted, I just picked up anything that was right there and just threw it back at her.”

Makes sense to me.

As of Wednesday, criminal charges have yet to be filed against either party.

Naturally, because 2019, the entire bizarre scene was caught on video and has now made its way on to the internet.

I know road rage has been diagnosed as a brain disorder, but I think someone in the medical profession needs to make McDonald’s rage also an official disorder of some kind.