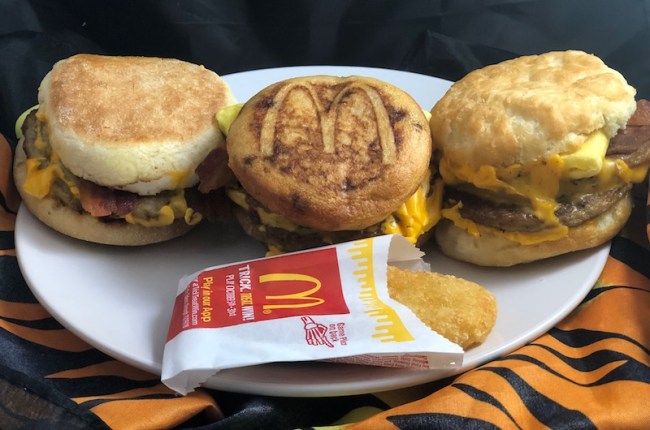 When it comes to fast food, I would argue there is no single meal out there superior to McDonald’s breakfast, which recently saw a major upgrade in the form of the Triple Breakfast Stack.

The Triple Breakfast Stack is the first item to be added to the breakfast menu in a decade, featuring two sausage patties and some bacon topped with an egg sandwiched between your carb of choice, whether you’re a McGriddle fan, a biscuit connoisseur, or an English muffin kind of guy.

The Triple Breakfast Stack premiered in restaurants around the country on Thursday, and as BroBible’s resident food and drink tester, I knew I had to give them a try.

I stopped by my local haunt and picked up all three offerings (along with the mandatory hash brown), and while I could have just taken a few bites and shared my thoughts, I didn’t want to let my $17.69 (nice) go to waste.

As a result, I made it my mission to channel my inner Morgan Spurlock and sit down to eat as much as I could in a single sitting and do terrible, terrible things to my body in the process.

Here’s how things played out.

I gazed at the spread in front of me while trying to figure out the best way to attack it.

If Adam Richman taught me anything, it’s that you save the carbs for the very end, so I ignored the hashbrown (300 calories) and set my sights on the McGriddle (740 calories), figuring the sweetness might be overwhelming in the later stages.

I savored the sweet and salty goodness, taking a couple of bites before turning my attention to the biscuit (890 calories), my vehicle of choice on those mornings when I regret the night before.

It was at this point I ran into my first problem. The biscuit was saltier than expected and drier than it normally is and I had my suspicions it would cause me some trouble in the long run.

I abandoned it in favor of the English muffin (820 calories), which was easily the tastiest of the three. Unlike the others (which were made with scrambled eggs), this was topped with an actual one and I had no problem taking a few bites before turning my attention back to the other two.

After five minutes, I had made a pretty good dent. 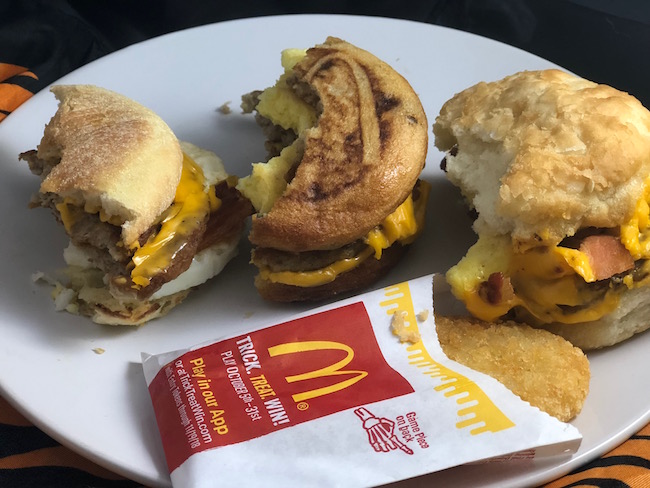 This was going to be easy— or so I thought.

By now, the sandwiches had started to cool down and so had the cheese, which somehow managed to fill every corner of my mouth when I tried to make up lost ground with the biscuit.

Around the eight-minute mark, things took a turn for the worse: I’d hit the infamous wall.

Joey Chestnut might have been able to power through but that guy also dunks hot dogs in water like a psycho, a strategy I was not going to employ no matter how desperate I got.

Over the next fifteen minutes, my bites turned into nibbles as I tried to whittle away at the sandwiches while my body began to protest the pain I was inflicting upon it.

At the 20 minute mark, I’d made a little bit of progress but my pace was getting exponentially worse. 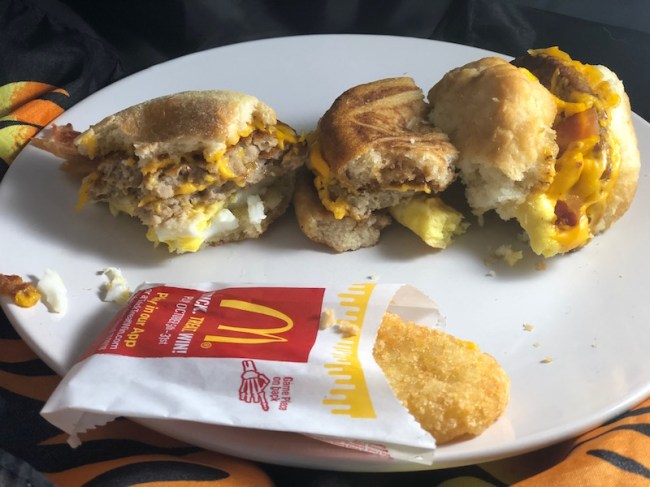 I resisted the temptation to indulge in a hunger-enhancing herb as I reached a point where I was ripping off tiny pieces of sausage and nibbling on slices of thin, chewy bacon in an attempt to make a dent.

My stomach started yelling like Nancy Kerrigan as it tried to figure out why I was subjecting it to such torture, and while I didn’t really know the answer myself, I soldiered on.

It’d been 45 minutes since I set off on my quest and the food was now colder than Luke Skywalker after he killed the wampa so I made a quick trip to the microwave to make things a bit more palatable.

By the time an hour had rolled around, the plate looked like this. 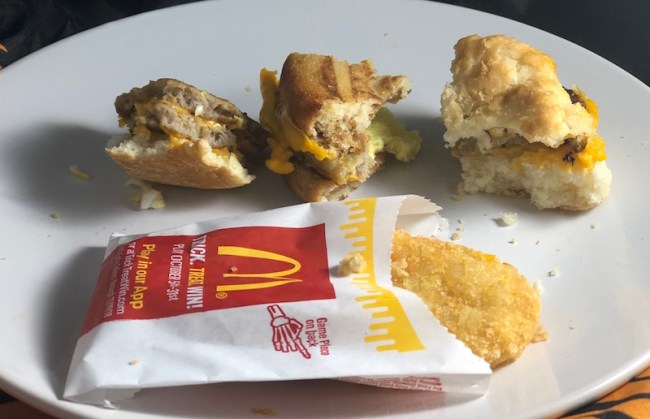 I made it my mission to finish at least one of the sandwiches before throwing in the towel and decided I needed some motivation. I took a breather to listen to the speech from Independence Day and the pump-up talk from Miracle, and as absurd as it sounds, I somehow caught a second wind.

After fifteen more minutes, I’d managed to house both the English Muffin and the McGriddle (and decided to take a bite out of the hashbrown to switch things up a bit) as my mortal enemy continued to mock me. 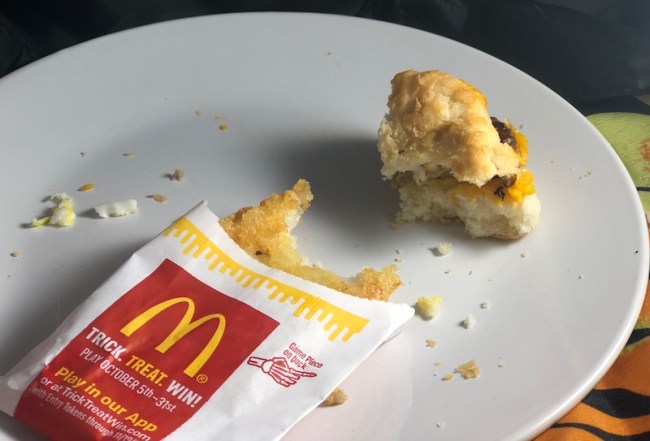 Damn you, biscuit. Damn you straight to hell.

My body was the Rocky to my Apollo Creed, begging me to stop the fight before something terrible happened, but I refused. The towel would not be thrown today.

This was it. The moment of truth.

I deconstructed the remaining sandwich and began to peck away, and one hour and thirty-seven minutes after I’d taken my first bite, it was done. I had become the first person to complete the 2,750 calorie Breakfast Triple Stack Challenge (which was mainly due to the fact that I invented it). 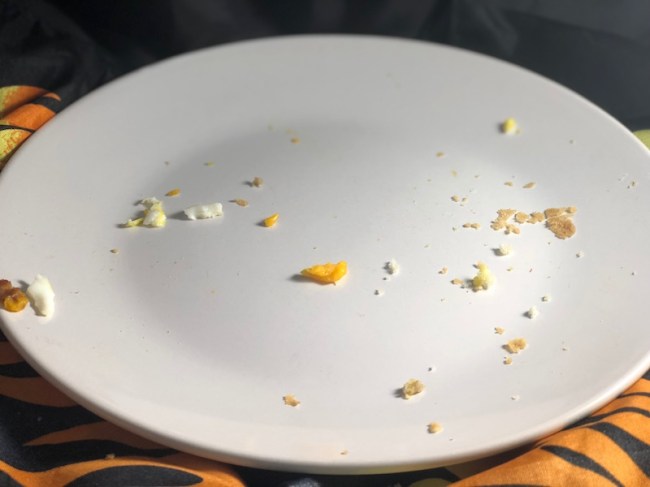 I could try to sum up the experience but I think the ending of Burn After Reading does it better than I ever could.

Should you try the Triple Stack at some point? 100 percent.

Should you try to eat all of them in one sitting? Zero percent. But don’t let me stop you from trying.