Racing Two $200,000 McLaren 570 GT Supercars Like A Maniac On A Dirt Road Looks SO Freaking Fun 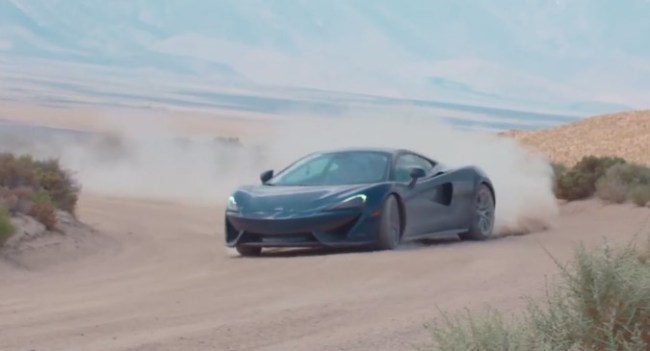 After watching this video of Mike Tornabene and Zac Mertens of GNARPM racing two $200,000 McLaren 570 GT supercars on a dirt road I may have never felt more jealous of two people in my whole life.

Why? In case you really don’t know, it’s because the McLaren 570 GT, according to Car and Driver, packs 562 horsepower into its 3.8-liter turbocharged 8-cylinder engine that can take the car from 0 to 60 in 2.9 seconds and reach a top speed of 204 miles per hour.

Oh yeah, and they took a couple of those bad boys racing down some dirt-freaking roads!

And for any of you naysayers who scoff and say, they didn’t really go off-roading as the title of the video suggests, Mike had this to say in response, “For those commenting that this isn’t “off-road,” for stock McLarens with 3.5 inches of ground clearance this is as off-road as it gets, so we’re counting it. They’re not going mudding or rock crawling, but the cars handled terrain they were not meant for, they killed it and we had a blast.”

Watch and join me in my envy…

Think that was nuts? How about this? It’s like Forza or Gran Turismo in real life, only not on a racetrack…or even pavement!

Pretty sure that’s not the recommended use for those cars.

Oh, and it Mike looks familiar, he should…