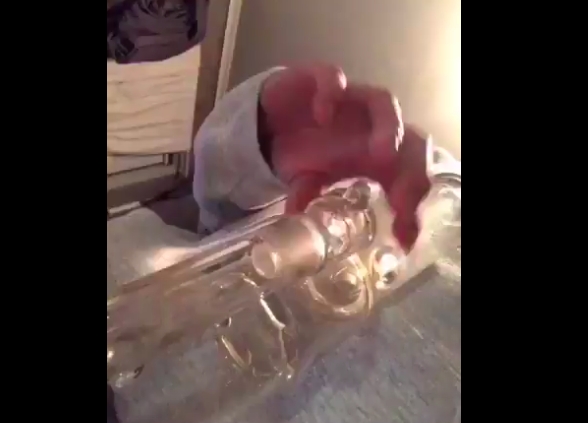 A few weeks ago, Morgan Stone sat down to take a bong rip and watch Californication. But something happened. And instead, he turned his moment into a viral sensation.

“When I heard that sound the bowl made pulling out of the stem, something just clicked in my head,” he said.

That was all Stone needed. Stone (aka STØNE), a San Jose State student, spent the next 15 hours mixing the sound sample from his bong, posting videos on Snapchat and Twitter along the way.

“I knew it was a funny video, I figured a few people would like it.”

But as his experiment accidentally evolved into a head-banging, bass house masterpiece, the Twittersphere took notice. Less than two hours after he tweeted the final version of the beat, he racked up 16 million views. He woke up the next day to 60 thousand retweets and 180 thousand likes. Online reactions ranged from marriage proposals to label offers and everything in between. He even got a shout-out from the DJ/producer Ghastly in his YouTube video, How to make it in the music industry.

Sat down an hour ago to take a bong rip and got sidetracked and made a banger??? pic.twitter.com/XoM55yGMam

As of this week, Yari (…the bong song’s official name) has been played over 22 thousand times on SoundCloud alone. He also released it on Spotify andApple Music.

But STØNE isn’t settling for a one-hit wonder. As his fan base grows exponentially, he’s got more music to keep up with the demand. The Bay Area producer has 7 tracks that are set to release soon. He’s also in the process of booking shows, making beats for rappers, and advising other producers.

Oh, and in case you were wondering, he did end up hitting that bong after he finished the song. Seven times. And they say stoners aren’t productive members of society.