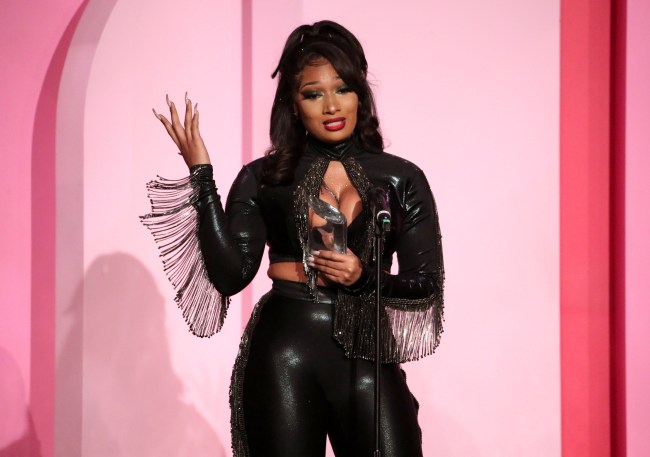 Megan Thee Stallion is out to prove the haters wrong after many have said she lied about her incident with Tory Lanez.

Last month, Lanez was arrested after he allegedly shot the “WAP” rapper in the foot after leaving Kylie Jenner’s party in LA.

Tory Lanez, whose real name is Daystar Peterson, was the person who allegedly shot Megan Thee Stallion following a dispute inside his vehicle Sunday morning, Page Six has learned.

“Tory fired the shots from within the vehicle while Megan was outside trying to leave,” a source exclusively told us on Thursday. “There is video and the police are investigating. This is a case of a man physically harming and abusing a woman.”

Since then, Megan has posted several videos twerking with friends which led to many people online to accuse her of faking her injuries.

On Wednesday, Megan shared a gruesome photo of her gunshot wound in an effort to put to an end to people calling her a liar.

“Lol what I have learned abt majority of the people on social media is y’all like to hear bad news before good news, a lie spreads quicker than the truth, and y’all really be believing the s**t YALL make up,” Megan captioned it. “I got hit at the back of my feet because when I got shot I was WALKING AWAY FACING THE BACK.”

“Why would I lie abt getting shot? Why are y’all so upset that I don’t wanna be in the bed sad ? Why y’all upset that I can walk?” she asked. “I got my stitches out my feet like 2 weeks ago and I was ready to go celebrate ‘WAP’ going number 1… I usually don’t address internet bulls**t but y’all people are so sick!”

“I usually don’t address internet bullsh*t but y’all people are so sick! God was really watching over me and I’m healing so well! Sorry I’m not ass sad and miserable as a lot of y’all lol but ima keep being Megan Thee Mf STALLION