Soon-To-Be Princess Of England, Meghan Markle, Was Once A Human Mannequin On ‘Deal Or No Deal’ 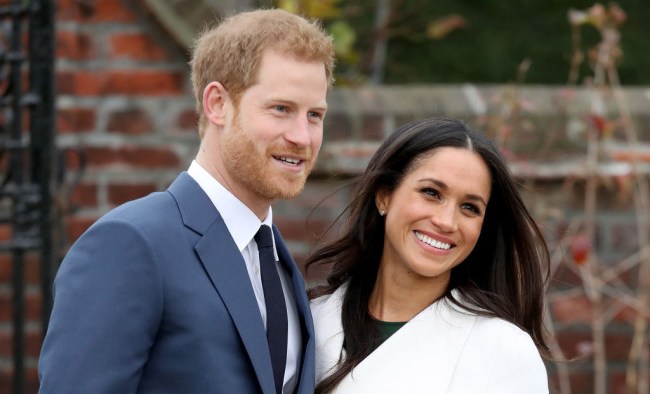 Anyhoo, the 36-year-old actress is officially giving up her acting career to marry this guy. No idea what she will do with all her spare time now, but godspeed to them both. (And to think, she could have been President…)

During an interview with Sky News on Monday, Markle explained the transition from acting to doing whatever it is a princess does…

“I don’t see it as giving anything up. I just see it as a change,” Meghan — who previously revealed the seventh season of Suits would be her last — explained. “It’s a new chapter, right?”

She continued, “I think what’s been really exciting as we talk about the transition out of my career and into my role is…the causes that are really important to me that I can focus even more energy on. Very early out of the gate, I think you realize you have access or a voice that people are willing to listen and with that comes a lot of responsibility, which I take seriously.”

Sooooo…. I guess that means we won’t be seeing her doing things like opening briefcases on game shows like Deal or No Deal in the future like she did back in 2007? Talk about your fairy tales…

Based on an interview Markle did with Esquire in 2013, I am guessing that would be a no.

ESQ: You were one of the briefcase girls on Deal or No Deal. That had to be sort of fun.

MM: I would put that in the category of things I was doing while I was auditioning to try to make ends meet. I went from working in the U.S. Embassy in Argentina to ending up on Deal. It’s run the gamut. Definitely working on Deal or No Deal was a learning experience, and it helped me to understand what I would rather be doing. So if that’s a way for me to gloss over that subject, then I will happily shift gears into something else.

ESQ: Can I just ask, do you know if you ever had the winning case?

MM: I didn’t ever have it. I don’t think I did. I was the ill-fated number 26, which for some reason no one would ever choose. I would end up standing up there forever in these terribly uncomfortable and inexpensive five-inch heels just waiting for someone to pick my number so I could go and sit down.

Too bad. She was really good at it. Oh well, she’ll probably be a great princess too, no matter what some people over in England believe.

Meghan Markle is unsuitable as Prince Harry's wife for the same reason that Wallis Simpson was unsuitable: she’s divorced and Harry’s grandmother is supreme governor of the CofE
https://t.co/CnEasK1T67