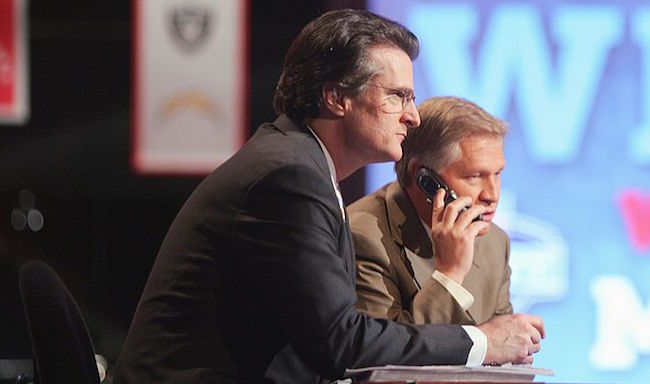 Since he first started covering the NFL Draft for ESPN back in 1984, Mel Kiper Jr. has been known for two things: the Big Board and his big hair. The football expert has always rocked what can only be described as a slicked-back blowout that makes him a spitting image of the Baltimore Raven’s logo:

Unfortunately, nothing lasts forever, as Kiper proved when he appeared on SportsCenter today in a segment with David Lloyd rocking a new haircut for the first time in over three decades. For The Win posted a video of the ESPN analyst debuting his new ‘do, and you’ll want to brace yourself before hitting play:

Kiper explained that his cousin Dennis was the man responsible for his new identity, saying:

“He’s a professional. I wanted it short. I said, ‘Do whatever it takes to get it so David Lloyd would not have an issue with it.’ And, hey, 35 years at ESPN, David, time has come where you can finally see my ears.”

Damn you, Dennis. Damn you straight to hell.