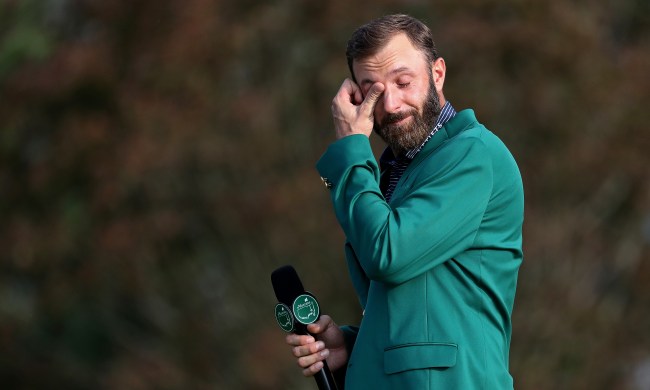 After Dustin Johnson’s dominant Masters win, the normally-stoic (read: robotic) DJ lost his composure and broke down during his interview. What a blubbering baboon. Keep it together, Dusty. Salty tears leave stains on green jackets, dontcha know? It was a moment that reverberated around the internet for a few reasons: first, DJ never shows any emotion. And second, we love to see men cry in sports.

Now, none of those guys apologized for crying. But that’s because they’re hockey guys and hockey guys don’t apologize unless they paralyze someone. They’re an aberration to an otherwise reliable law of masculinity: men apologize for crying.

There’s Dustin Johnson, apologizing as his voice cracks and looking away in shame, even though that’s EXACTLY what we want to see him do.

Here’s Connell from the hit Hulu show Normal People, apologizing profusely to his damn therapist for letting it flow:

Nick Mullens says it to Erin Andrews when he gets a little choked up after his first NFL start:

And right after that, Mark Ingram does that cool-guy move where he pulls his hat down over his face on draft night. I don’t feel like finding more examples but they sure are out there, and it has got to stop. All these guys are running away from their tears, deflecting them, hiding them from us. Meanwhile, all we want is to drink them in, to let their tears lubricate our tearballs such that our streams join as one—a confluence of heart water.

Is that too much to ask, guys? Can you lean in to these emotions? Own them, please. I’m dog-tired of watching men apologize for something that women seem proud to display. God, you look at social media and some women will post full collages of themselves crying—mascara skidmarks down their cheeks, snot bubbles delicately dancing from from their noses like Christmas ornaments, eyeballs more bloodshot than a wolf’s. I’m not saying the dudes need to grandstand, but certainly don’t ask for forgiveness.

I’m not much of a cryer myself. I think it’s because I haven’t accomplished anything worth crying over. Someday, it might be nice to be surprised by a catch in my throat, a crack in my voice, that welling up sensation in my eyelids. Who knows, maybe I have to have a child or something. I’ve heard that’s heavy.

I promise you this though: if I do cry, I’m not apologizing to nobody. Good luck lowering the floodgates, whoever is nearby. We’re talking 10+ years of brackish buildup behind this dam. It’s gonna be WET.