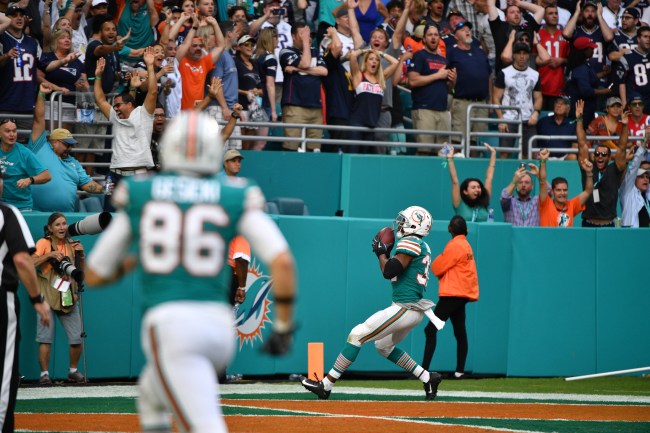 The Miami Miracle. It captured the nation’s attention for an entire 72 hours, and then everyone realized it would hold no relevance in the grand scheme of things. But to the Miami Dolphins and their fans–who have been ruled with an iron fist by Tom Brady, Bill Belichick and the Patriots for the better part of two decades–the #MiamiMiracle symbolized something more than just a wild fluke play in a regular season game for a franchise who had no chance of reaching the playoffs, never mind winning a postseason contest.

The play symbolized a passing of the AFC East torch. The ushering in of a new dynasty. A fresh start. It sounds like complete bullshit to anyone outside of Miami, but Kenyan Drake’s 69-yard touchdown was the longest score with no time left in regulation in the Super Bowl era. And you’d be crazy to think that Dolphins fans weren’t going to slobber over a rare opportunity to get their hands on some history. Hell, even the Dolphins franchise applied for a trademark for “MIAMIRACLE” on December 19 to commemorate the victory.

Kenyan Drake launched the Miami Miracle football into the stands, and six weeks later the ball was put up for auction, despite Drake and the franchise’s best efforts to retrieve it.

After 23 bids during a month-long auction, the ball was sold for $18,678, a spokesperson for Steiner Auctions told the Sun Sentinel.

JUST IN: @steinersports has auctioned off the “Miami Miracle” football, thrown into the stands by Dolphins RB Kenyan Drake, for $18,678. pic.twitter.com/zaGfWLgyao

I will tell my kids about that play. If they ask. And I remember.