Michael B. Jordan Releases Tear-Jerking Statement On The Passing Of Chadwick Boseman 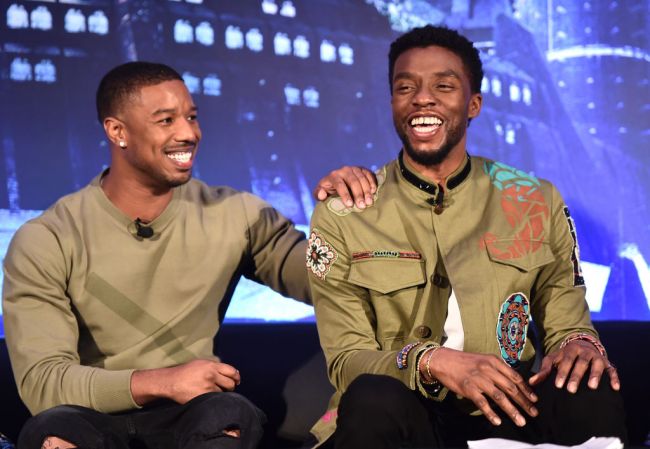 As the world continues to reckon with the sudden and tragic passing of Chadwick Boseman, tributes from all across the globe continue to pour in — from fans and strangers to friends and colleagues.

Boseman — who passed away Friday, August 28, at the age of 43-years-old following a four-year battle with colon cancer — made a career out of bringing icons from the black community to life (James Brown, Jackie Robinson, Thurgood Marshall, Ernie Davis, and Black Panther, just to name a few) and has now become one in his own right.

Boseman’s status as a legend was perhaps best encapsulated in the tribute from Michael B. Jordan, who starred alongside Boseman as Eric Killmonger in 2018’s Black Panther. It should be noted that Boseman’s talent was so immense that the only other actor who could play Black Panther, Michael B. Jordan, was relegated to playing the villain in this Academy Award-nominated film.

In an Instagram post on Monday night,  Jordan said his goodbyes to his friend with perhaps the most tear-jerking tribute to the late actor yet, as Jordan constantly repeats how much he wishes they had more time.

I’ve been trying to find the words, but nothing comes close to how I feel. I’ve been reflecting on every moment, every conversation, every laugh, every disagreement, every hug…everything.

One of the last times we spoke, you said we were forever linked, and now the truth of that means more to me than ever. Since nearly the beginning of my career, starting with “All My Children” when I was 16 years old you paved the way for me. You showed me how to be better, honor purpose, and create legacy. And whether you’ve known it or not…I’ve been watching, learning and constantly motivated by your greatness.

Everything you’ve given the world … the legends and heroes that you’ve shown us we are … will live on forever. But the thing that hurts the most is that I now understand how much of a legend and hero YOU are. Through it all, you never lost sight of what you loved most. You cared about your family , your friends, your craft, your spirit. You cared about the kids, the community, our culture and humanity. You cared about me. You are my big brother, but I never fully got a chance to tell you, or to truly give you your flowers while you were here.

I’m more aware now than ever that time is short with people we love and admire. I’m gonna miss your honesty, your generosity, your sense of humor, and incredible gifts. I’ll miss the gift of sharing space with you in scenes. I’m dedicating the rest of my days to live the way you did. With grace, courage, and no regrets. “Is this your king!?” Yes. He. Is! Rest In Power Brother.

As a gigantic Marvel Cinematic Universe nerd, the closing of Jordan’s tribute hit me right in the feels, as it’s an obvious reference to his line in Black Panther when he asks Wakandans, as he’s defeating T’Challa, if this is their king. Chadwick was their king then and now he will be always. Rest in Power.