Michael Bloomberg Is Paying Instagram Influencers To Post Dank Memes To Convince America’s Youth He’d Be A Dope President, Yo

As you’re probably aware, we’re less than a year away from the next presidential election, and every day, a gas station’s worth of fuel gets dumped on the evergrowing dumpster fire that is American politics while things increasingly heat up as we get closer and closer to November.

Last year, the Democratic Party held multiple debates that featured enough people on stage to put on an impromptu performance of Hamilton only to see the field gradually winnow down before primary season officially kicked off with the Iowa caucuses last week.

However, there’s one candidate who’s been absent from those nationally televised wars of words: Michael Bloomberg, the former New York City mayor who decided to use some of the $62 billion he has at his disposal to see if he can add “President of the United States” to his résumé.

Last year, longshot Democratic candidate Mike Gravel recruited a few teens to raise his profile by using purposefully gaudy memes to help him gain some traction, and while his campaign ultimately fizzled out, it would appear Bloomberg is taking a page out of that book as he attempts to court America’s youth.

During a debate in January, Bloomberg’s social media team spent the night sending out a steady stream of #BloombergFacts that you’d expect to originate on Weird Twitter as opposed to the official account of a presidential candidate.

Mike has eaten clams casino for breakfast, lunch and dinner every day for the past 30 years. #BloombergFacts #DemDebate

Now, it appears he’s turned his attention to Instagram, as The New York Times reports his campaign has begun to reach out to influencers and meme accounts and offered to sponsor posts designed to position him as hip and cool.

Bloomberg has reportedly established a relationship with Meme 2020, a firm with connections to Jerry Media, the company built on a foundation of shameless thievery that successfully managed to minimize the role it played in the disaster that was Fyre Festival in the Netflix documentary about the debacle that it helped produce.

Over the past few days, posts sponsored by Bloomberg—who has spent an estimated $200 million on his campaign so far—have started to pop up on a number of popular accounts who were more than happy to accept some of that cash.

However, not everyone in the influencer community is thrilled with this recent development—especially The Fat Jew, who also rose to prominence by stealing jokes but apparently still has some morals based on his explanation for why he declined an offer from Bloomberg. 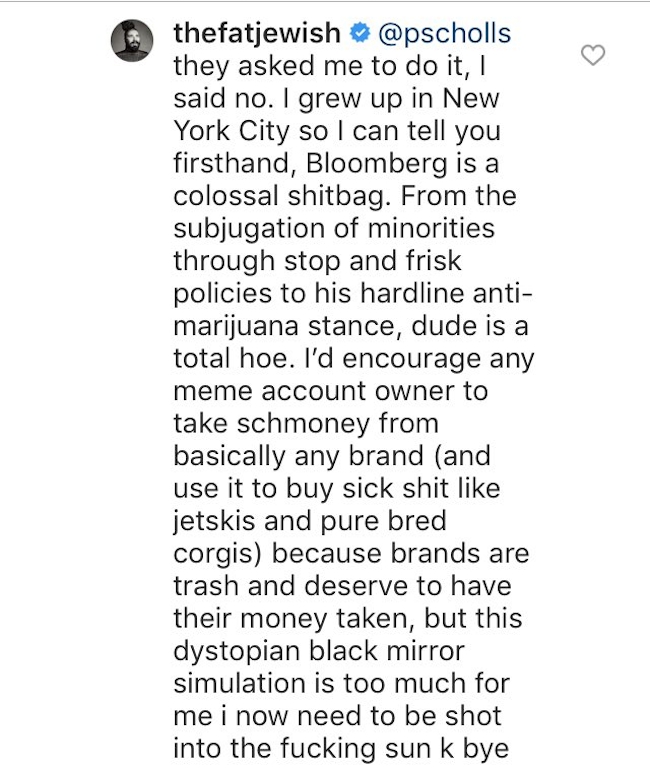 The Democratic National Committee recently retooled the requirements needed to earn a spot on the debate stage and there’s a chance Bloomberg could make his debut during the one being held in Las Vegas next week, where I can only imagine he will appear on stage wearing a backward hat and a shirt that says “Music Band” while carrying a skateboard over his shoulder.