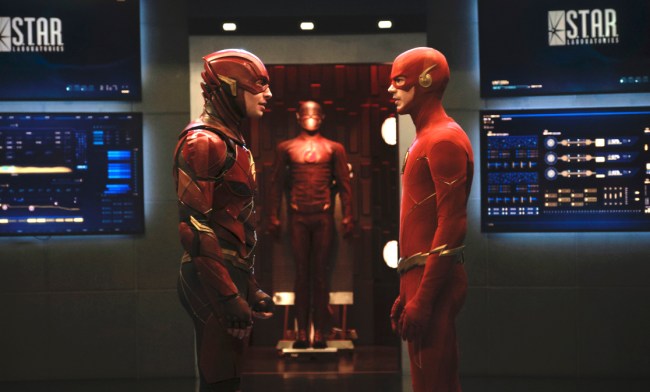 I’ve been covering the entertainment industry since 2015, and in that time, I’d say this Michael Keaton-returning-as-Batman story ranks up there with Marvel Studios getting the rights to Spider-Man as one of the most shocking pieces of comic book news I’ve ever reported on.

In terms of both surprise and importance, both of these announcements shaped the future of their respective franchises: Tom Holland’s Spider-Man, for example, is now the MCU’s central figure.

Keaton returning to the cape and cowl of the Dark Knight is just as monumental, as it not only breaks the model in terms of casting (Keaton is 68-years-old) but it opens the door for a new era of superhero cinema with the introduction of the multiverse. If you’re a fan of the genre like myself, it’s a wonderful time to be alive.

And while this Batman news may have come out of the blue to fans like ourselves, Warner Bros. and DC actually laid the foundations of Keaton’s Batman earlier this year.

The key lies in… the CW’s Arrowverse? Look, I know I’m a relatively gigantic nerd, but even for me, whatever they’re doing on cable television is just a step too far down the rabbit hole for me. Based on the reaction of fans, the Arrowverse — which consists of, I don’t know, five or six shows at this point?  — is quite successful, so more power to ’em. I just simply don’t watch TV shows on basic cable considering the depth of superior quality that’s out there elsewhere.

Anyway, back to the Arrowverse and how it already laid the foundation of Keaton’s Batman:

As a wave of antimatter causes red skies and tears through a number of realities, destroying them (at least for the time being), one of those worlds is Earth-89. In addition to being a nod to the year Keaton’s Batman premiered, the scene featured Danny Elfman’s Batman theme, and a cameo by Robert Wuhl, who played journalist Alexander Knox in the Tim Burton movie. In the scene, Wuhl sits on a bench, reading a story about Batman — and the photo appears to be an old licensed-art drawing based on the Burton/Keaton costume.

This means that in the multiverse populated by the Arrowverse shows, both the Earth on which Ezra Miller’s Flash took part in Justice League and the Earth on which Robert Wuhl’s Alexander Knox knew Michael Keaton’s Batman existed. [via Comic Book]

The aforementioned Erza Miller cameo actually happened earlier this year, so it’s POSSIBLE that Warner Bros. did this intentionally, already knowing their future plans with the character. The DCEU has been a mixed bag thus far, but if they had the foresight to work in this reference, that shows they — for perhaps the first time — have a legitimately structured plan, and that’s something to be excited about.

At this time, The Flash is currently scheduled to hit theaters sometime in the summer of 2022.