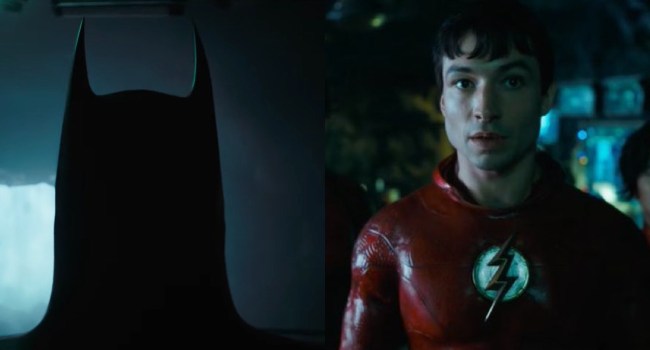 Despite all of the turmoil surrounding The Flash — namely, star Ezra Miller (allegedly) raising hell on the island of Hawaii — Warner Bros. unveiled new footage from the film at CinemaCon on Tuesday night.

While the footage has yet to hit the internet, details of what was shown in the sizzle real have. According to journalists in attendance, Michael Keaton’s Batman — the actor’s first time playing the character since 1992’s Batman Returns — says to Miller’s Flash “You wanna get nuts? C’mon let’s get nuts!”. This is, of course, one of Keaton’s most famous lines from the original 1989 film.

In addition to the reveal of the “Let’s get nuts!” line, the new trailer also reportedly confirmed that Michael Keaton will be reprising his role of General Zod from Man of Steel, showed that Keaton’s Batman has multiple Batsuits, and gave fans a proper introduction to Sasha Calle’s Supergirl.

The Flash, which is set to star Ezra Miller as (at least) two different versions of the character, in addition to Michael Keaton as Batman, Ben Affleck as Batman, Sasha Calle as Supergirl, Michael Shannon as General Zod, Kiersey Clemons as Iris West, and Ron Livingston as Henry Allen will hit theaters in the United States on June 23, 2023. With over a full year until the film’s official release, it’ll be fascinating to see how Warner Bros. markets it given Miller’s recent issues.