Michelle Carter, The Girl Convicted Of Convicing Her Boyfriend To Kill Himself, Is Getting An Early Release 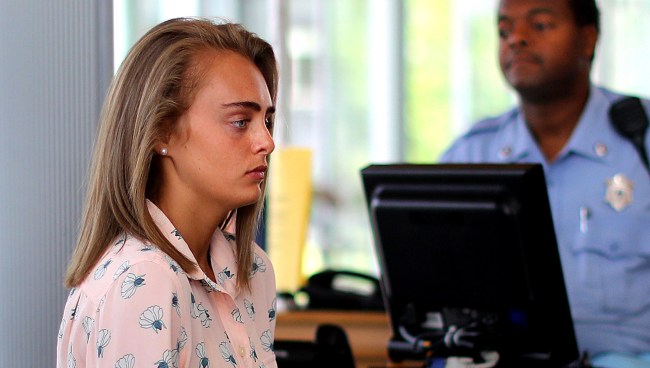 In August of 2016 we covered the trial of Michelle Carter, who when she was 17 helped convince her long-distance boyfriend, 18-year-old Conrad Roy III, to commit suicide with a series of texts.

Carter was charged with involuntary manslaughter after Roy committed suicide by poisoning himself with his truck’s exhaust in a Kmart parking lot in Fairhaven, Massachusetts, dying of carbon monoxide poisoning, following over 20,000 text messages the pair exchanged in which she routinely encouraged him to kill himself.

She also reportedly spoke with Roy for 47 minutes while he sat in hs truck and pushed him to kill himself when he was having doubts about going through with it. (The full transcript of one of their text exchanges can be viewed here.)

It was that phone call that reportedly convinced the judge in her trial to find her guilty and sentence her two-and-a-half years in jail. Juvenile Court Judge Lawrence Moniz added that Carter would only be required to serve 15 months of the sentence.

On Monday it was announced that Carter, now 20, who was supposed to be released in May 2020, would be serving even less time than that, according to Boston 25 News.

Michelle Carter is serving a 15-month sentence after being convicted of involuntary manslaughter in the 2014 death of her boyfriend, Conrad Roy III. A judge determined that Carter, who was 17, caused the death of the 18-year-old Roy when she ordered him in a phone call to get back in his carbon monoxide-filled truck that he’d parked in a Kmart parking lot.

Carter is set to be released from jail on January 23, a spokesperson for the Bristol County Sheriff’s Department confirmed to Boston 25 News on Monday afternoon. Inmates over at the Bristol County House of Corrections – where Carter is serving time – are able to earn time for good behavior.

“There have been no problems and she has been attending programs, which is common at state facilities like the Bristol County House of Correction,” said Jonathan Darling, the spokesperson for the Bristol County Sheriff’s Department.

This news came just hours after the United States Supreme Court denied her appeal to have her conviction overturned on the basis that her actions were protected by the First Amendment and a “unprecedented” violation of her free speech rights because it was based solely on texts and phone calls.

The sordid “texting suicide case” has since been turned into a two-part documentary by HBO called I Love You, Now Die: The Commonwealth v. Michelle Carter.